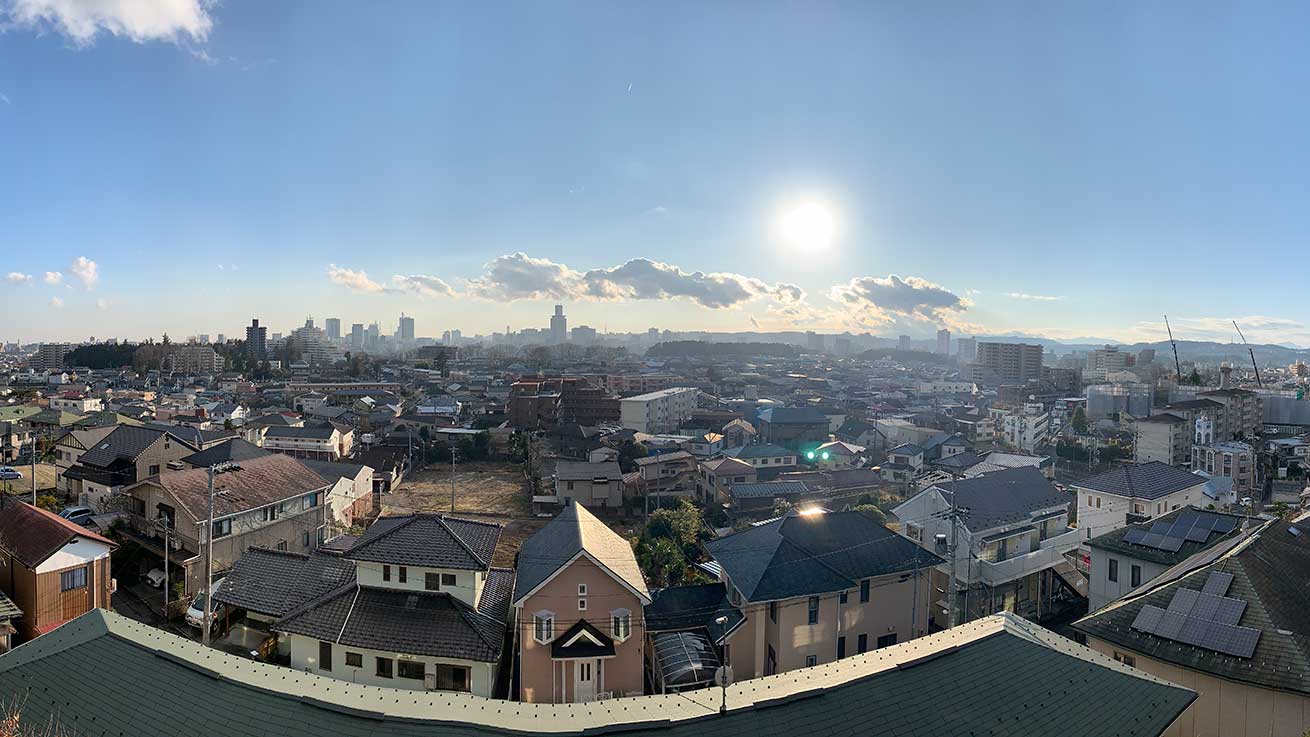 A Territorial View of Sendai from Komatsushima

One of the things we enjoy the most about living in Sendai is the many new places we get to explore. We have always enjoyed walking; it is our preferred exercise. And Sendai is a pretty walkable city. Once you get used to the narrow streets and even smaller sidewalks, many places are easily accessible on foot. It helps that much of Sendai is pretty flat. But that presents another problem. It is hard to get a territorial view of Sendai!

Getting a Territorial View of Sendai

But we have another favorite that is much closer to us. As I mentioned, downtown Sendai and the surrounding neighborhoods are all pretty flat. But as you get further away from the city center, you do get some higher areas. Nakayama, where our family lives, is one of them. So are the Dainohara and Komatsushima neighborhoods right behind us. Especially Komatsushima offers a territorial view of Sendai all the way to the distant coastline on one side and the mountains on the other. 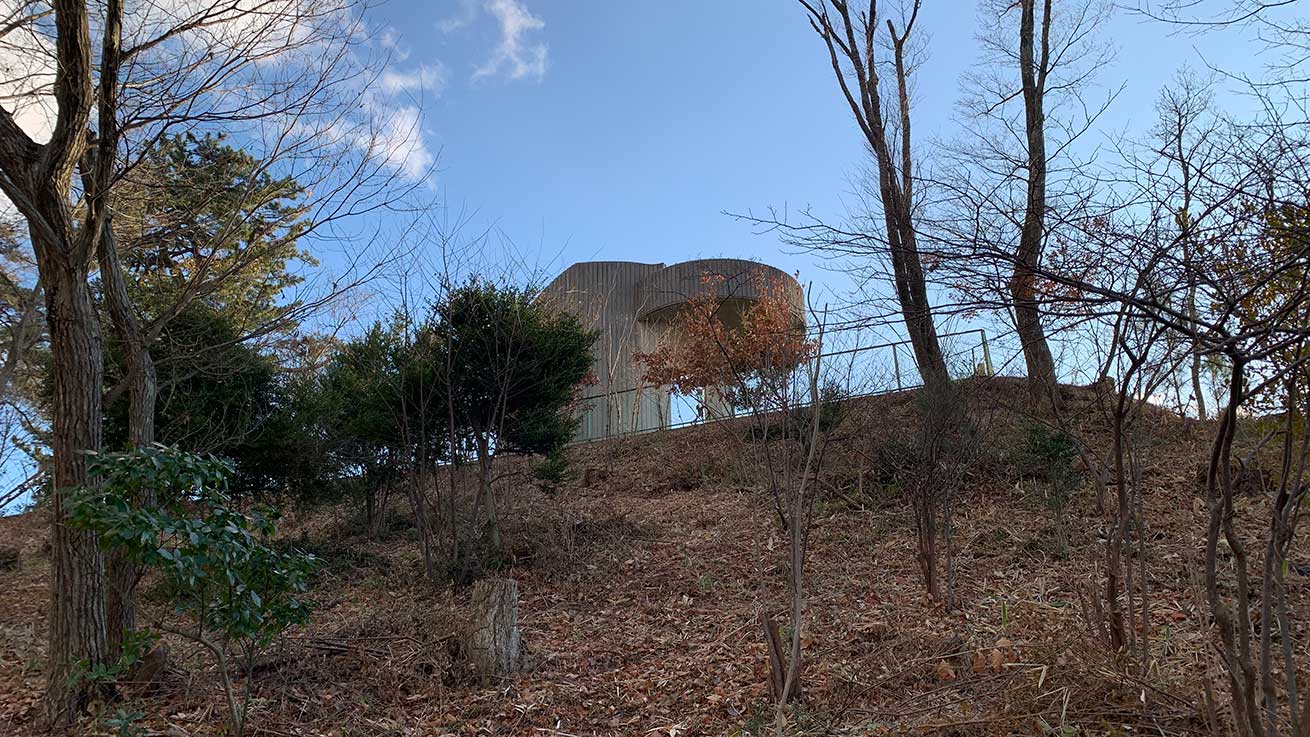 On one of my walks this spring, I decided to venture off the beaten track, so to say. I decided to take the long way to the grocery store in Dainohara. Instead, I decided to follow a little side street into a residential area. After winding my way up a hilly road, I noticed a small footpath through an open gate in a fence. Usually, I would have thought this led to private property. But seeing that people were coming down the path, I ventured on.

After passing through the gate, the path split in two. To the right was the campus of Tohoku Pharmaceutical University. To the left, it kept climbing up a ridge. And as far as I could tell with my minimal language skills at the time, there seemed to be some lookout point ahead. Encouraged, I pressed on. 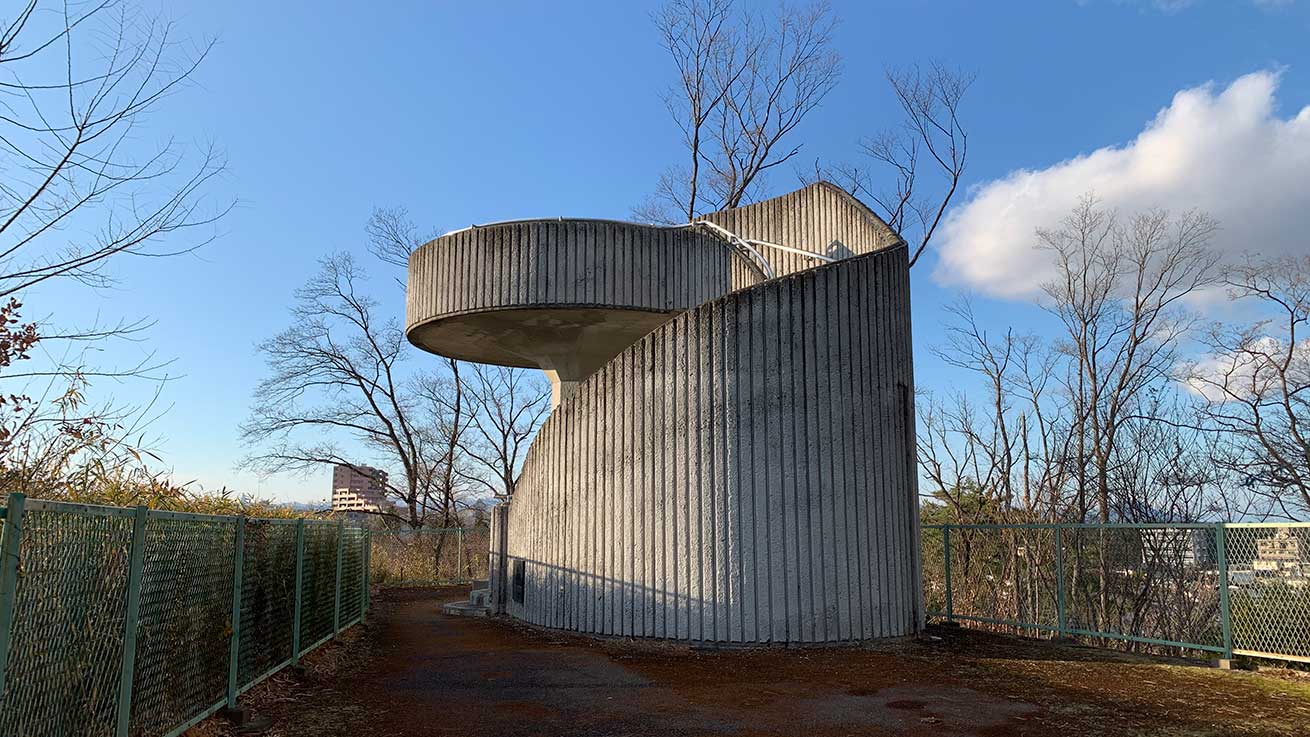 Arriving at the top of the hill, I immediately noticed a round concrete structure. Could this be the lookout? Upon investigation, I discovered stairs winding up to the top. Emerging on the top, I found myself on a relatively small open area with a territorial view of Sendai all around. 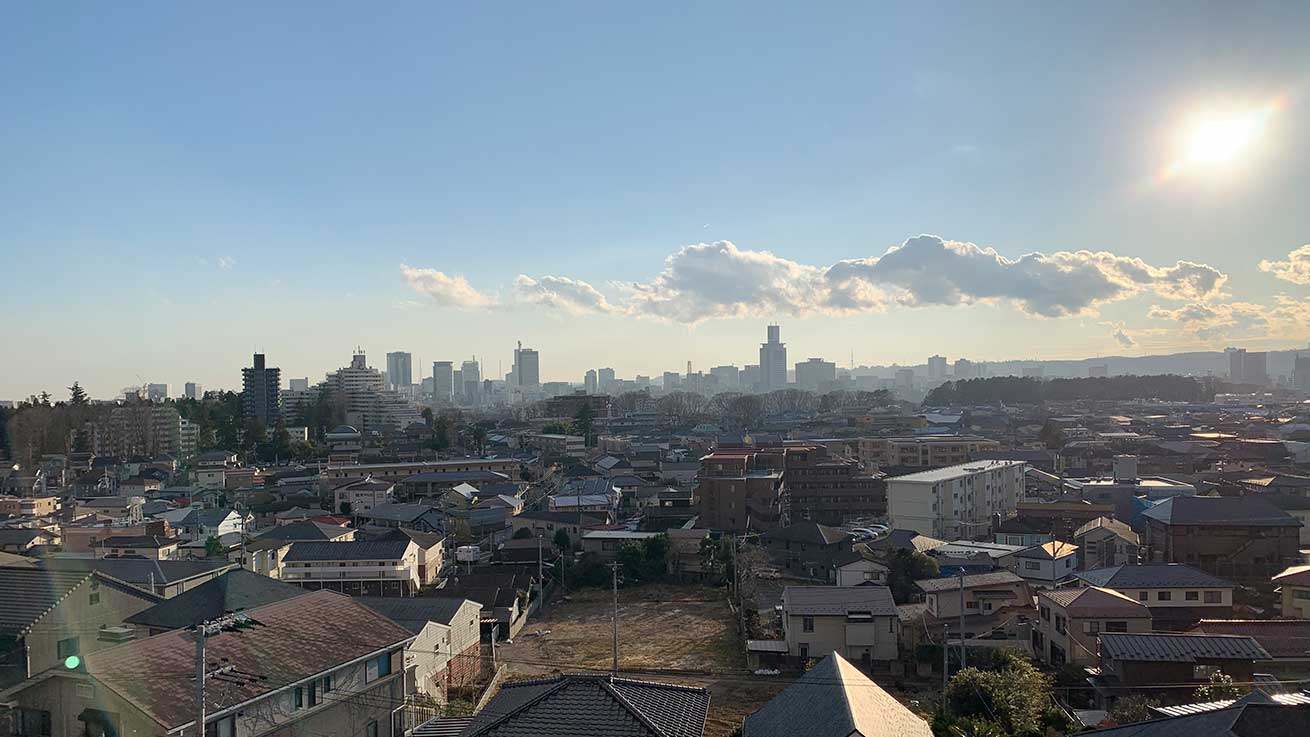 Looking straight ahead, I had a territorial view of Sendai, including the skyline and central business district. To my left, the panorama stretched from Tsutsujigaoka all the way to the coastal area in the hazy distance. On my right, I could see all the way to Aoba Castle, and the Zao Mountains in the distance. 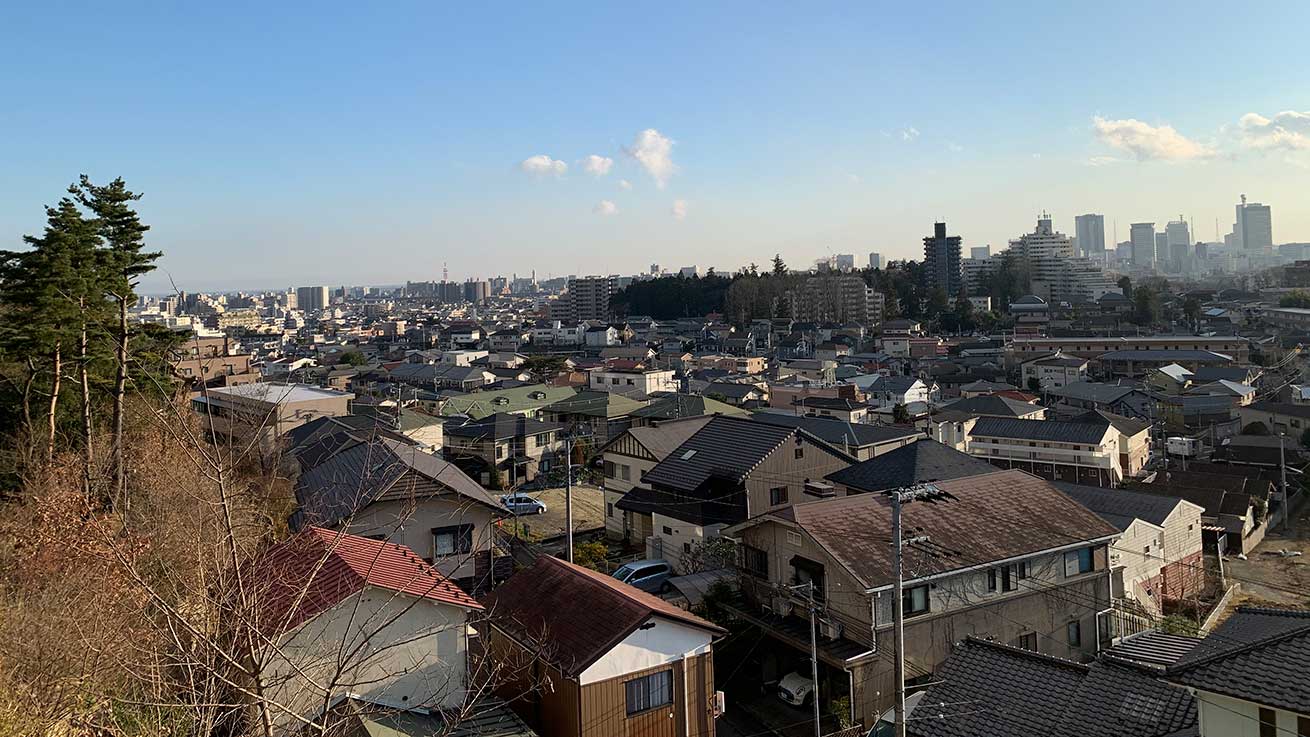 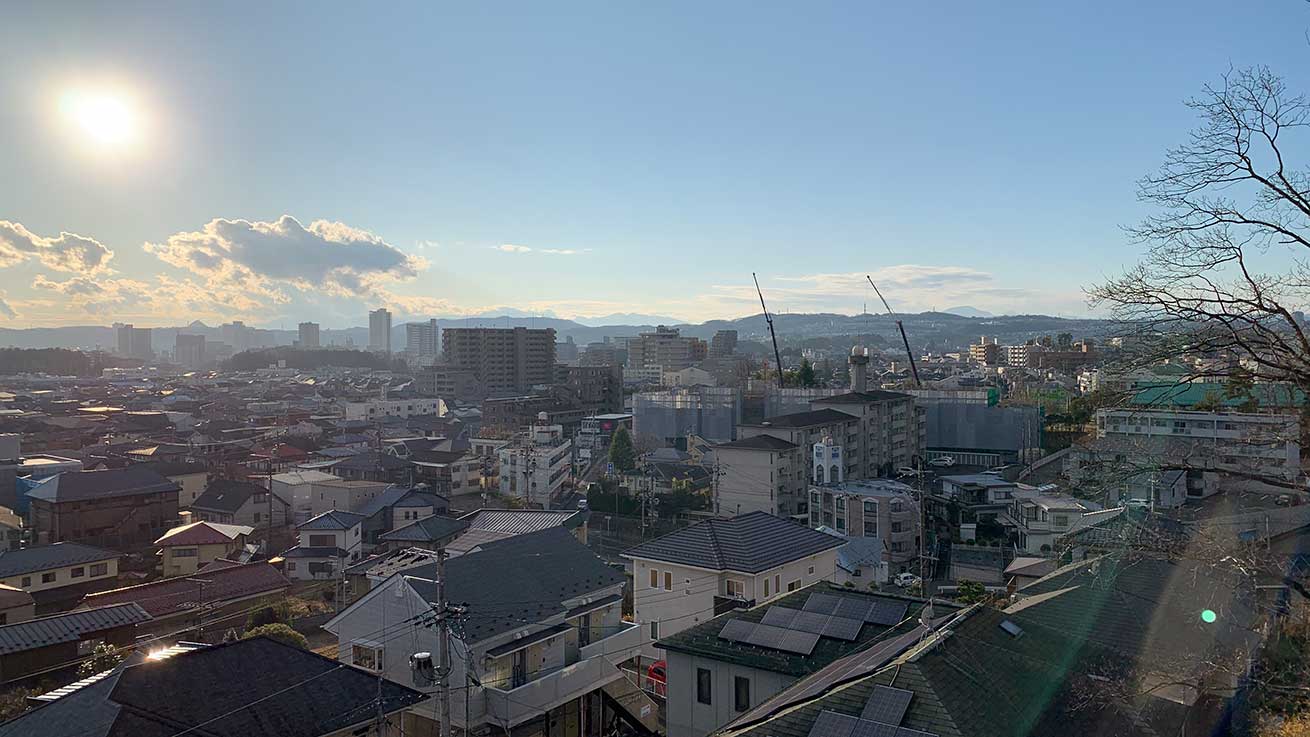 Turning around to look the other way, I could see the neighborhoods of Kitayama and Nakayama and the Daikannon Statue in the distance. On this side, trees obstruct quite a bit of the view. On a crisp sunny winter day like today, when Coco and I climbed up, you can see much more. 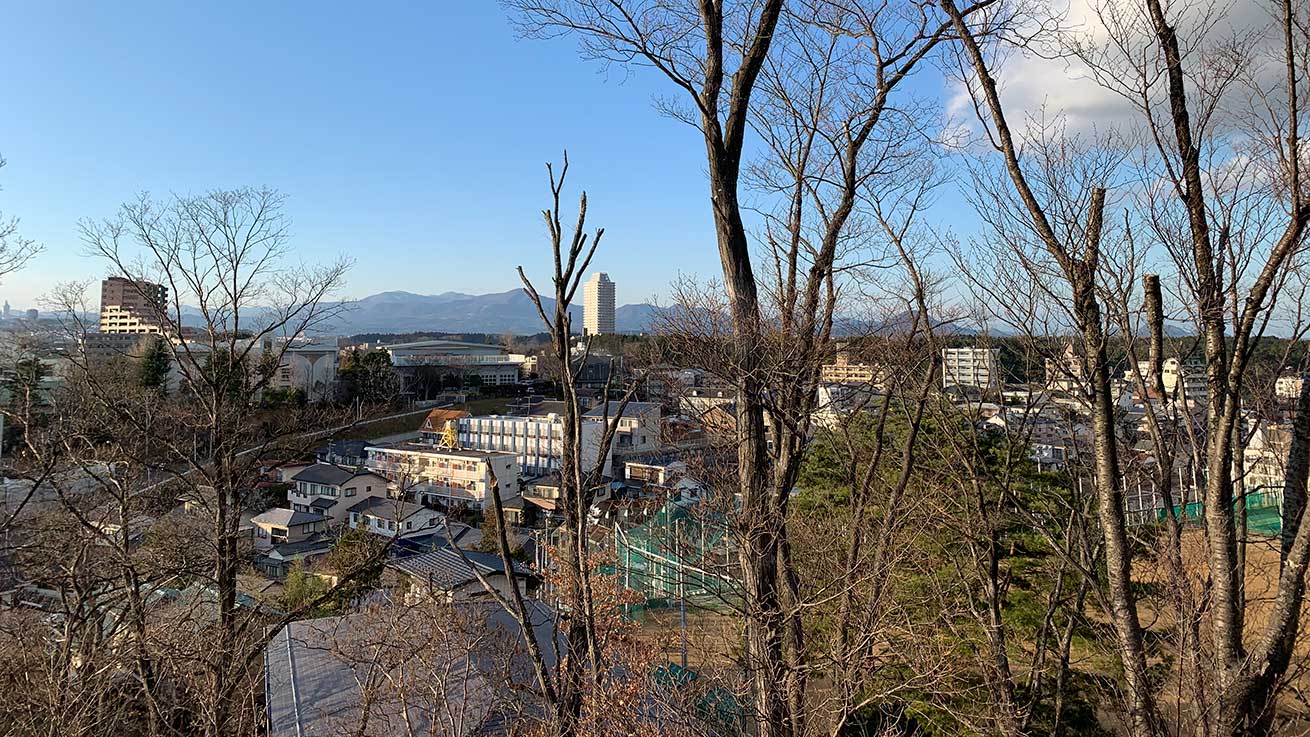 Our Favorite Territorial View of Sendai

Since I first discovered the lookout in Komatsushima, we have been back many times. It is only about one kilometer from where we live, so it is a short walk for us. And it is surprisingly peaceful, considering it is surrounded by neighborhoods, schools, and businesses on all sides. Except for one time, we always had the lookout to ourselves. We love the territorial view of Sendai, especially now that we know more about the city, and recognize more places.

We also love looking down into the more immediate neighborhoods. Since we live there, we know a lot of streets and buildings. And it is fun to see the areas change. There is a lot of commercial and residential construction going on, so every time we visit the lookout, there are a few new buildings.

And as we recognize more places, we also get new ideas which areas we still need or want to explore. Stay tuned, and we will keep you posted on what we discover next.

If you would like to join us for a walking tour or get a personal guide to Discover Sendai, please feel free to contact us for rates and availability.