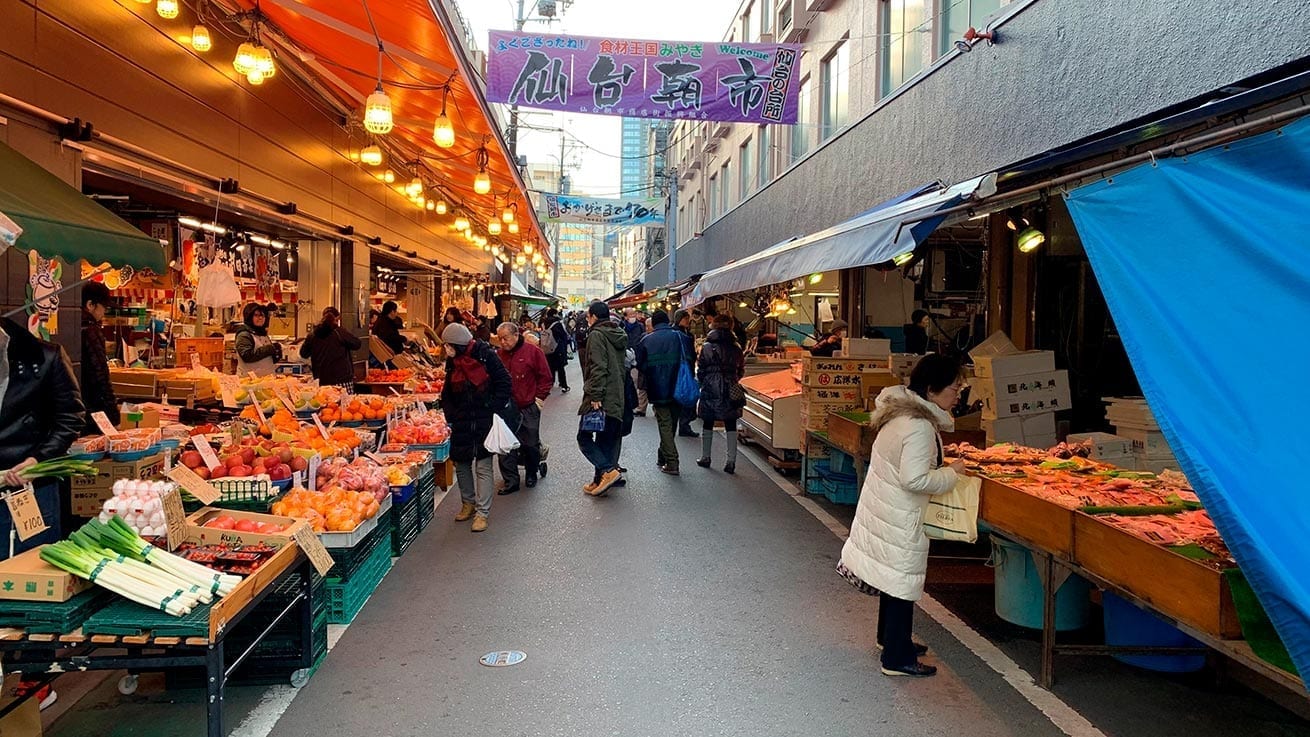 Most of you already know that Coco and I are big foodies. We love to eat, cook and explore new food and recipes. And we love to explore the vibrant restaurant scene in Sendai. And the Asiachi Morning Market was on our radar before we moved here from Seattle. It actually was one of the first places we visited! Today we are taking you back to Sendai’s Kitchen. We are regulars already, and frequently shop here, or grab a quick snack.

The market stretches into buildings on either side of the block, so it is quite the little labyrinth to explore. Different vendors are trying to outdo each other in attracting shoppers. This makes Sendai’s Kitchen a lively and fun atmosphere. It does help if you don’t mind crowds, as this place is usually packed. Locals use this as their grocery store. But the Asaichi Morning Market is also very popular with tourists.

Today we simply walked along the main thoroughfare, a roughly one block stretch. Stalls are aligned on both sides of the little street, and stretch into the buildings as well. The sheer amount of fish, meat, and produce can be overwhelming. And we are always amazed at the prices, especially coming from Seattle. We can definitely understand why this is Sendai’s Kitchen!

More than a Market

But Asiachi Morning Market has more than just food vendors. Hidden among the labyrinth of stalls and vendors are a number of restaurants. Our personal favorites include a place specializing in Asaichi Ramen! And there are other places where you can grab a quick meal on the go in Sendai’s Kitchen. Don’t have time to sit down, or want to grab a quick snack on the go?

One of the best known places at Asaichi Market is the croquette place near the end of the street. This place is always busy, and we understand why. Croquettes are a popular snack in Japan, or part of your lunch or dinner. And this stall makes the most amazing croquettes we had in a long time. Buying one is not enough, unless you want to stand in line again. We haven’t decided on our favorite yet; we just keep coming back.

So that’s your quick overview of Sendai’s Kitchen. We will feature the Asaichi Morning Market in more posts as well explore it further. And of course we will take you there when you come visit Sendai. After all, your visit would not be complete without a croquette or three, would it?