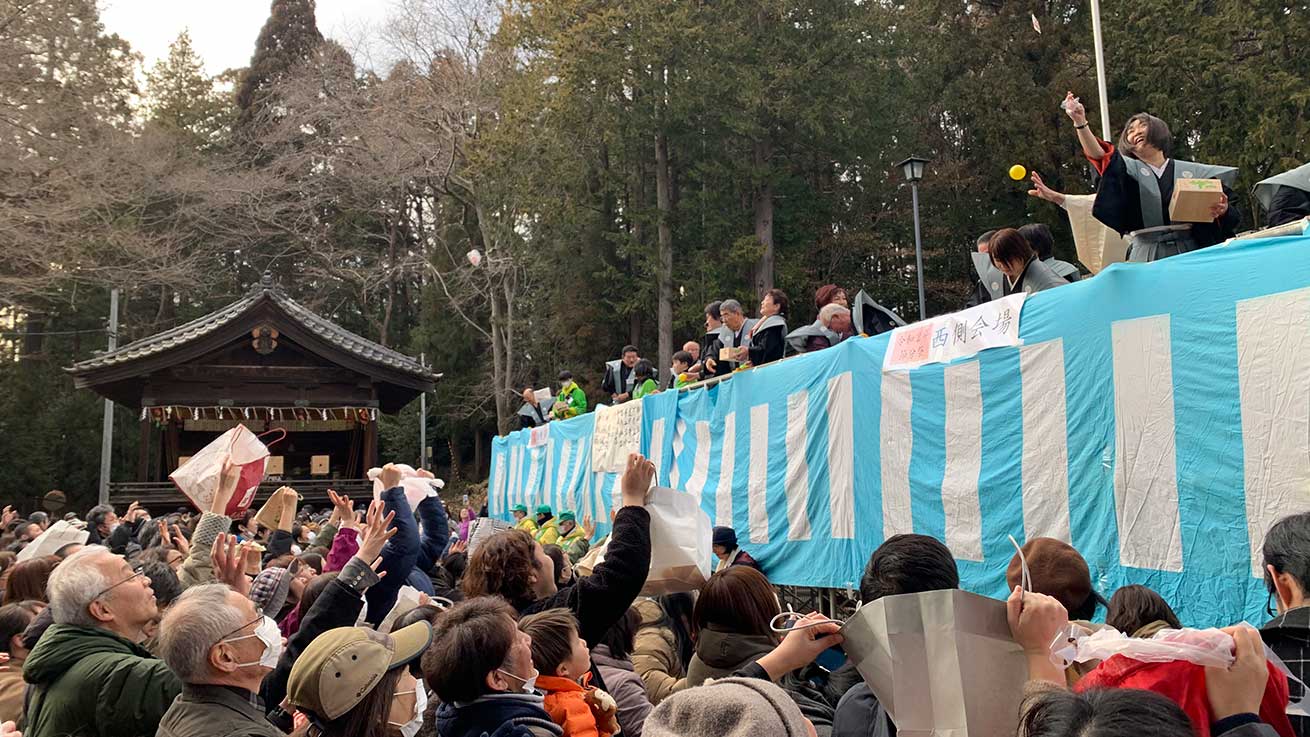 One of the many fun festivals or holidays in Japan is Setsubun or the “Bean Throwing Festival.” Setsubun is part of the Haru Matsuri or Spring Festival. The bean throwing festival is celebrated every year on February 3rd or 4th, the day before the arrival of spring, according to Japan’s lunar calendar.

This was one of the first festivals we attended when we arrived in Sendai, and we looked forward to throwing beans for Setsubun again this year. Both of us love the excitement and energy of Japanese Matsuris or festivals, and the bean throwing festival definitely has both!

By now, we are much more familiar with our neighborhood, and with the various festivals at Toshogu Shrine. Since it is the closest shrine to us, we are frequent visitors; readers of our blog will recall that we just observed Hatsumode at Toshogu Shrine. Of course, throwing beans for Setsubun is much more lighthearted.

Celebrating the Arrival of Spring

Last year Setsubun was on a freezing cold afternoon; I remember I almost froze my hands off shooting video with my iPhone. See what I go through to keep you to provide you with first-hand accounts? This year our winter was a lot warmer, and the afternoon was sunny and downright balmy. 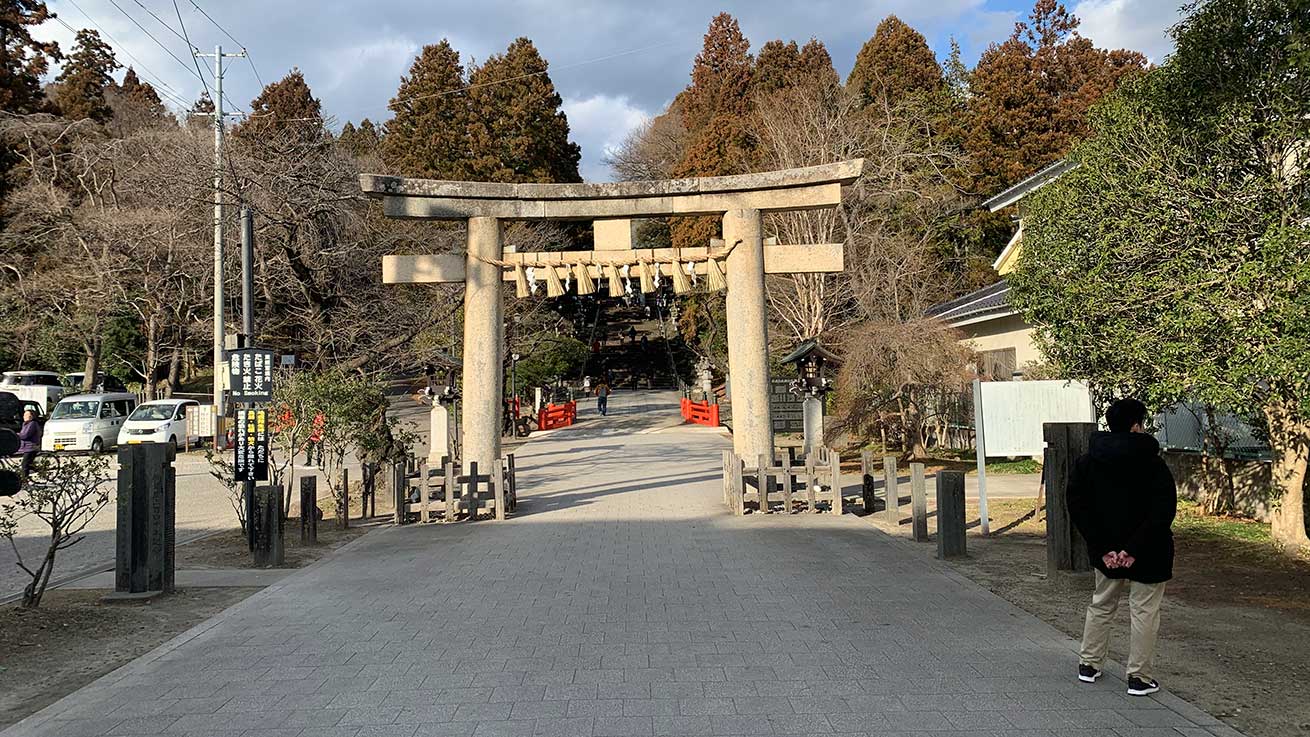 We already discovered that while Setsubun is celebrated at other shrines in Sendai, throwing beans at Toshogu Shrine is a crowd-pleasing favorite. Apparently, the viewing angle and proximity to the raised platform provide a lot of additional excitement. And on a sunny afternoon, a big crowd was already gathering when we arrived at Toshogu Shrine. 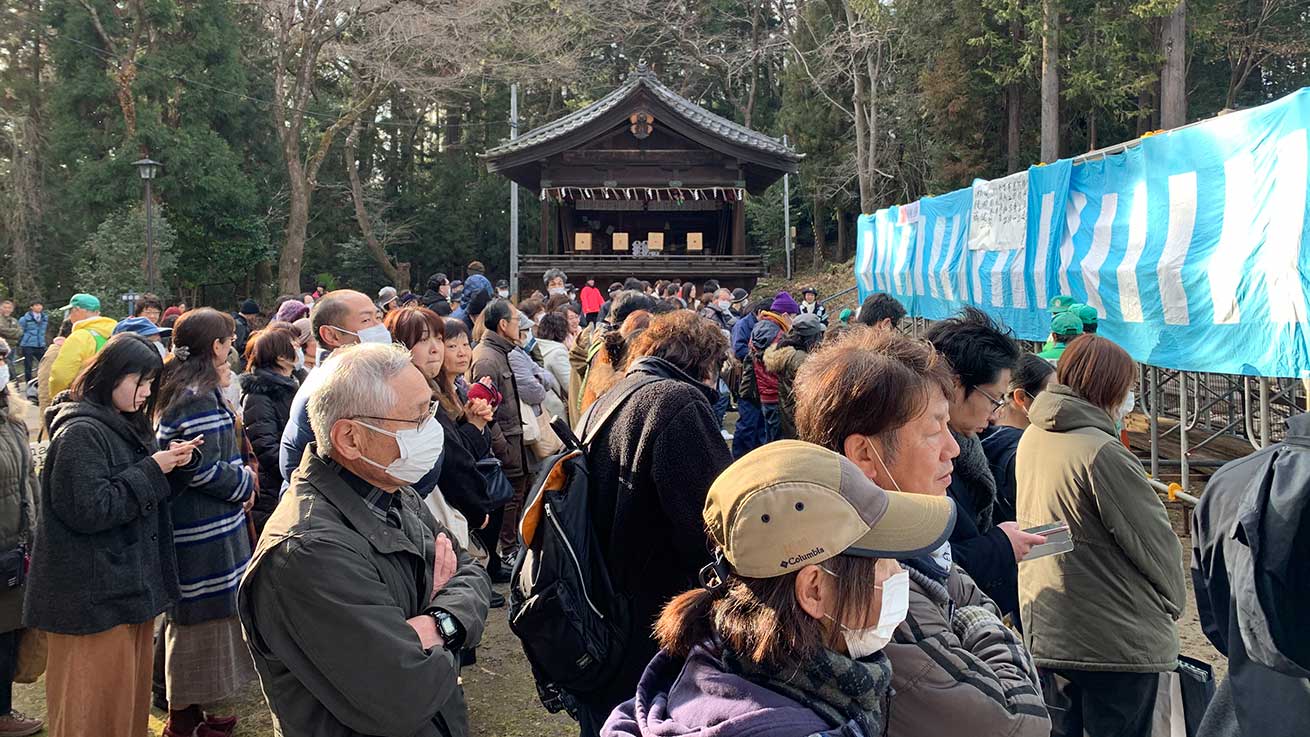 And not only the crowds seemed much more substantial than last year, but the actual event also appears to have grown as well. This year two raised stages on either side of the main steps promised more goodies flying through the air. 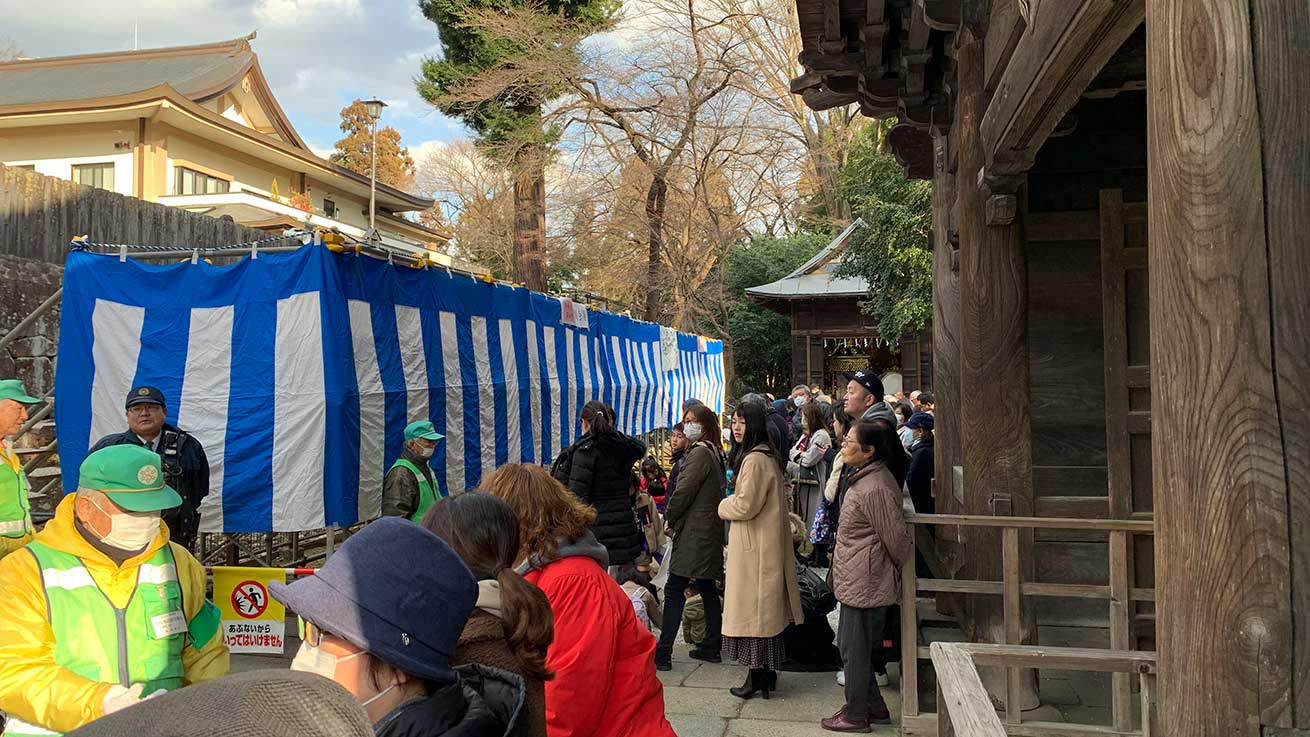 The Bean Throwing Festival is a Family Affair

While the Setsubun holiday is celebrated by all age groups, it is particularly fun for kids. And as we will soon notice, the opportunity to grab some tasty treats flying through the air is appealing to kids of all ages!

We arrived early to get the best spot. Last year we stood back a little to observe the whole event. This year I wanted to capture the excitement up close and personal with the GoPro.

All around me, excited groups of people started to gather tighter and tighter. The majority were mothers with children, and it was fun to watch them chat excitedly, greet friends and neighbors, or check out the latest promotional messages on Line.

But plenty of older people wanted to be part of throwing beans at the Toshogu shrine. Some of them were merely along with their grandchildren, but others apparently were on their own, shopping bags in hand to catch the goodies. As I said, this is a real family event.

As much fun the socializing and catching up was, the crowd and especially the children were getting anxious for the main event to start. It is customary for local celebrities and politicians to throw beans and other goodies from the raised platform. Apparently, some of them were a bit late in arriving. But soon, a parade of dignitaries and celebrities emerged from the shrine and ascended onto the platforms. A brief welcome and explanation preceded the actual bean throwing. 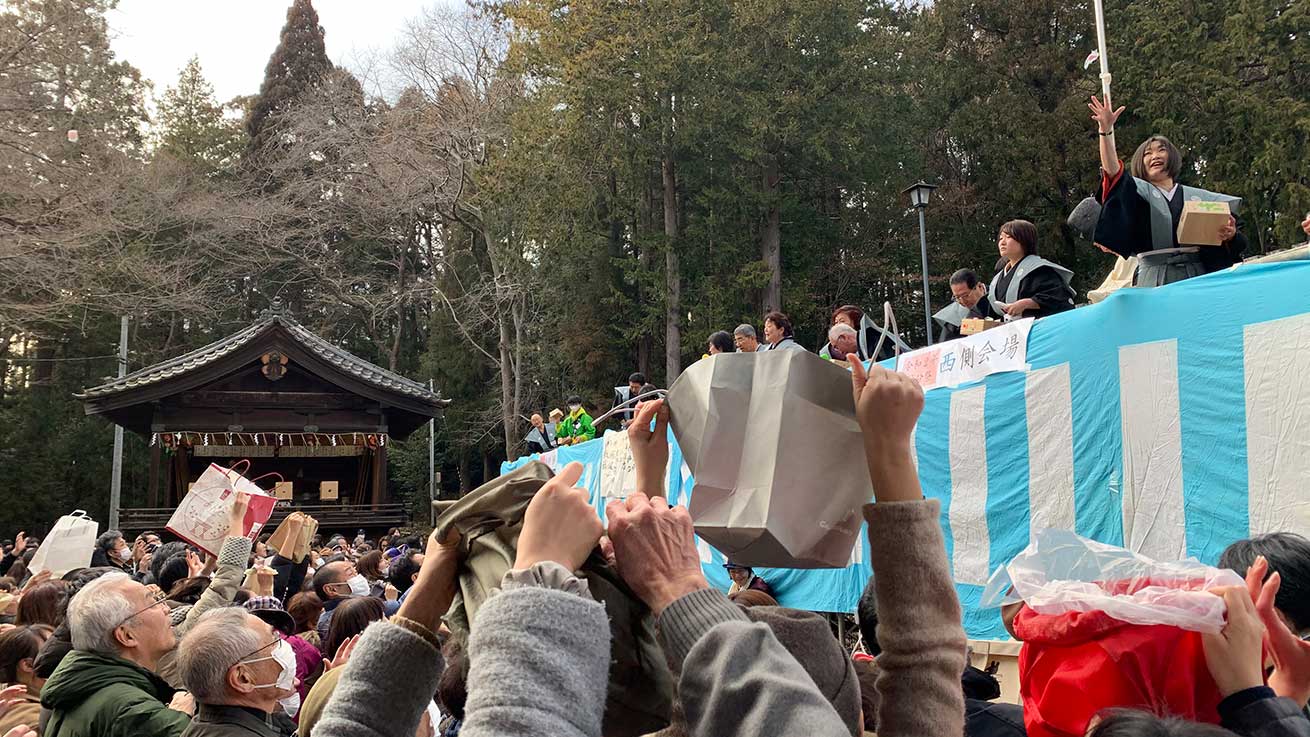 With excited shouts of “Out with the devil, in with good fortune!” the fun started. Handfuls of roasted soybeans, as well as other treats and even promotional goodies, were thrown from the platforms. Down below, the crowd was jostling for position, holding open shopping bags to catch as many treats as possible. Exited shouts and peals of laughter filled the air. The bean throwing festival was underway! 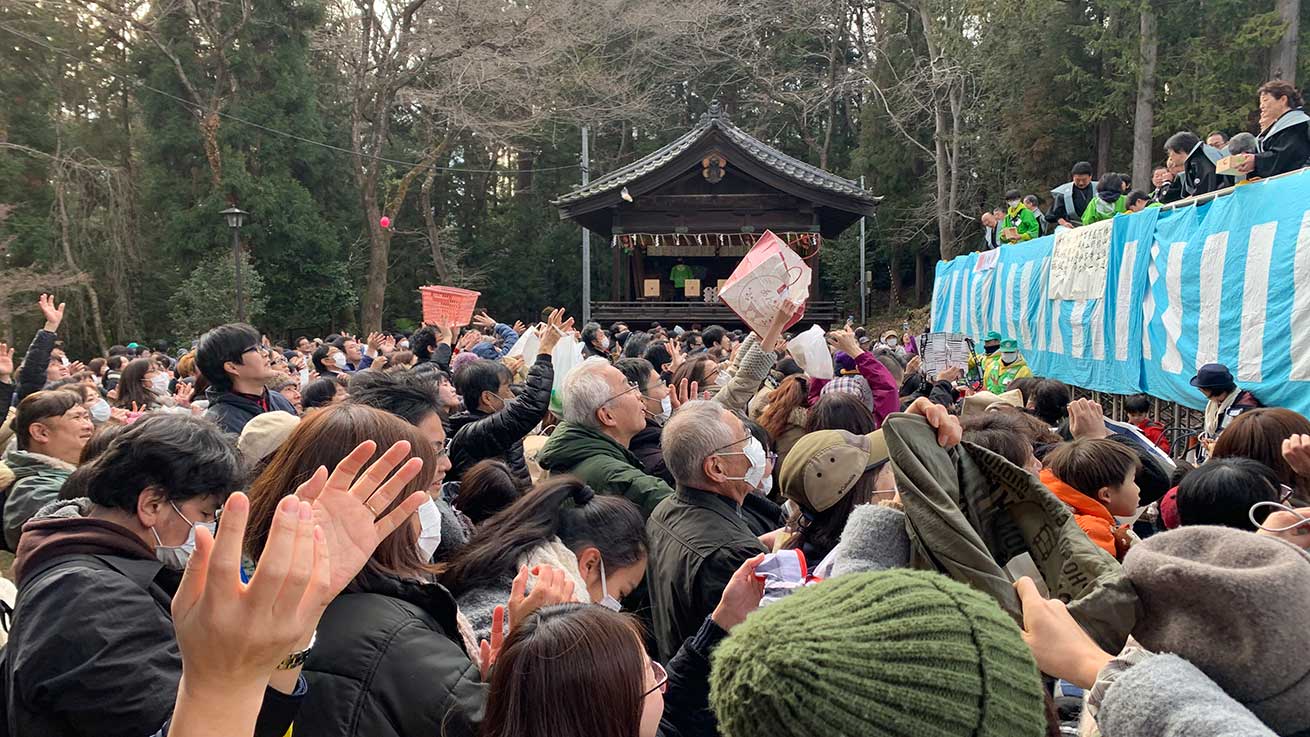 From my carefully chosen vantage point, I could observe both platforms as well as the crowds around me. For a while, there were so many projectiles flying through the air, I was hit a few times. On older woman to my right shouted, “Throw some this way!” as kids were scrambling to grab items off the ground. A direct hit into an open shopping bag resulted in shrieks of laughter from a mother and young daughter right next to me. A few people were just there to enjoy the festive atmosphere, and gladly handed over their catch the children closest to them.

The fun and excitement lasted for about ten minutes, or until the dignitaries ran out of projectiles. From what I could tell, the bean throwing festival came to a successful conclusion. The crowds slowly started drifting towards the stairs down to the street. Kids and parents were excitedly comparing their catch. 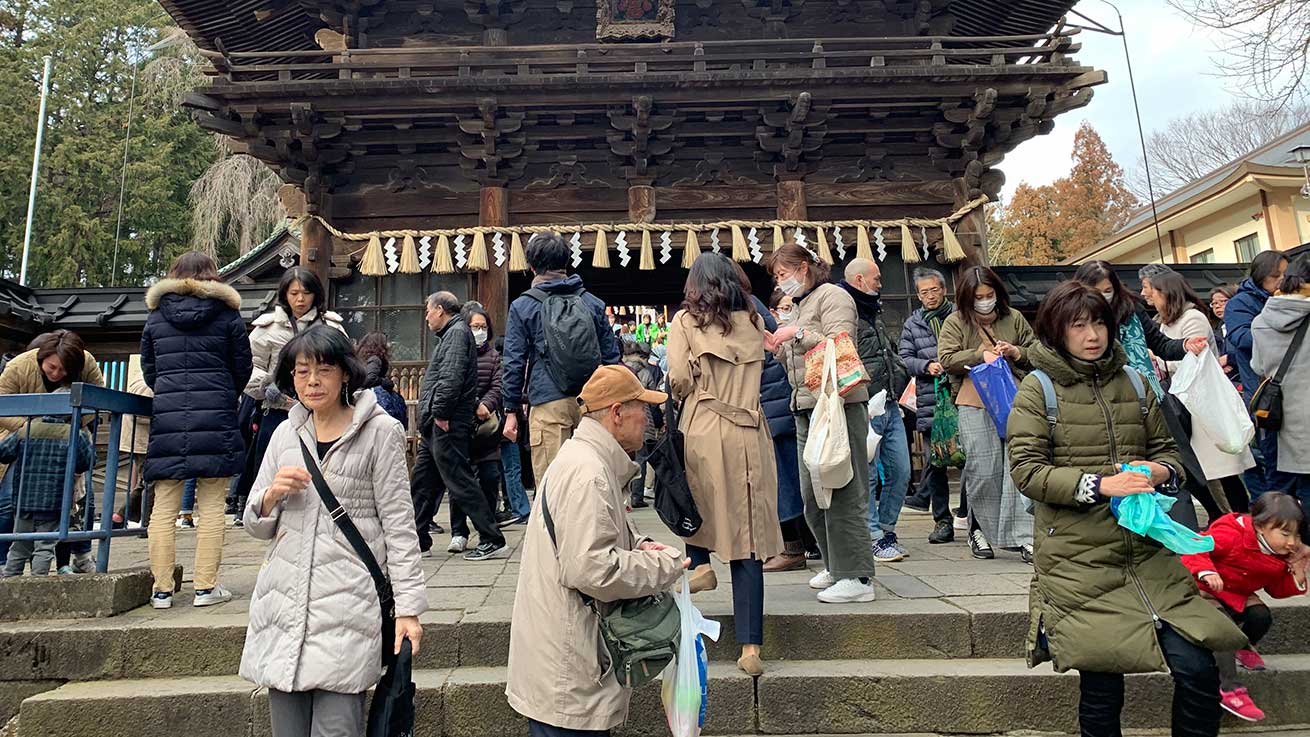 From what I could tell, the devil never had a chance! Even if he could have survived all the projectiles in the air, the shrieks of laughter and exiting shouts when a catch was made would have scared him away for sure. The bean throwing festival did its job for another year.

As I was walking back, with a brief stop at our local konbini, I saw lots of festival-goers on their way home. On foot, by bicycle, or in baby strollers, everyone clutched and compared their catch. It made me smile all the way home!

If you would like to join us on a visit to an upcoming matsuri or get a personal tour of Sendai, please feel free to contact us for rates and availability.