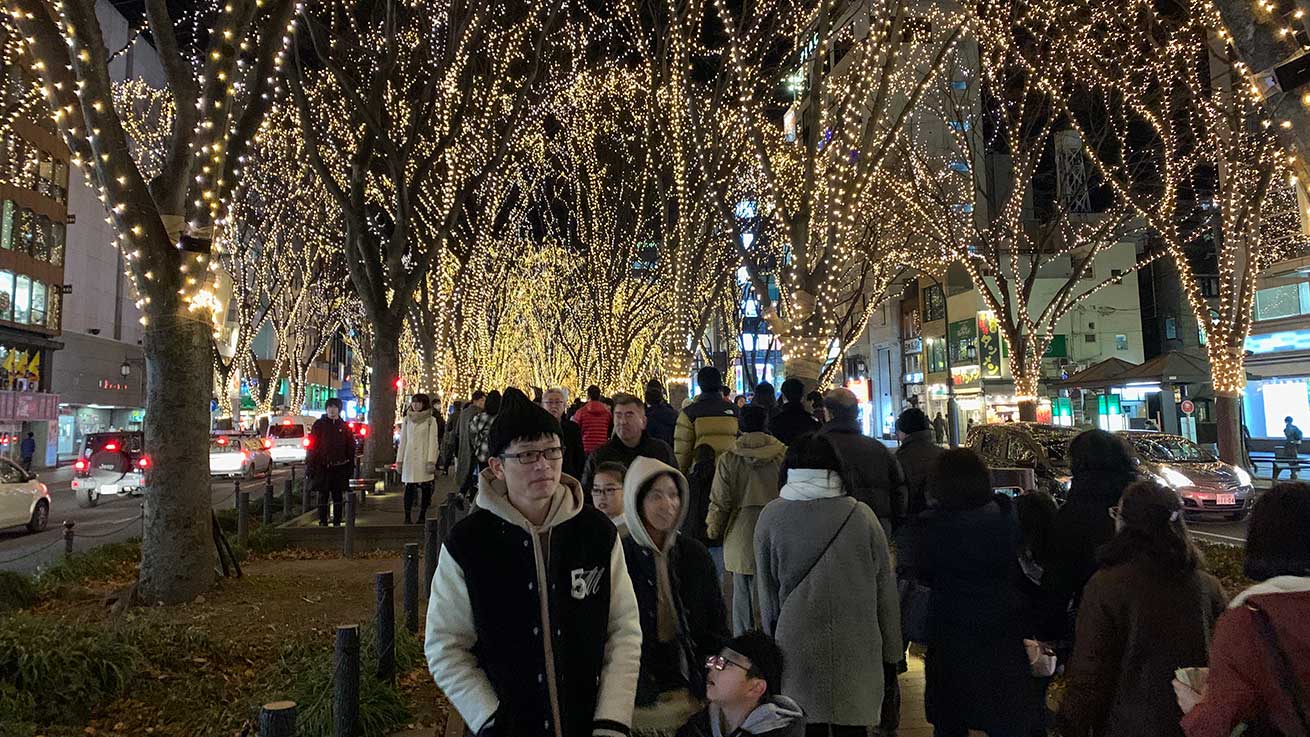 A Stroll Through the 2019 Sendai Pageant of Starlight

As I mentioned recently, Christmas is a bit different in Japan. Christmas decorations, as we know them in Europe or North America, are pretty much limited to retail and department stores, shopping arcades, and some of the major hotels. In residential areas, it is infrequent to find even a few Christmas lights. But that does not mean the Japanese don’t enjoy festive displays. Far from it, they have taken so-called winter illuminations to new heights. And Sendai is no different. One of our most popular wintertime events is the lights on Jozenji-dori. Let’s take a look at the 2019 Sendai Pageant of Starlight.

The 2019 Sendai Pageant of Starlight 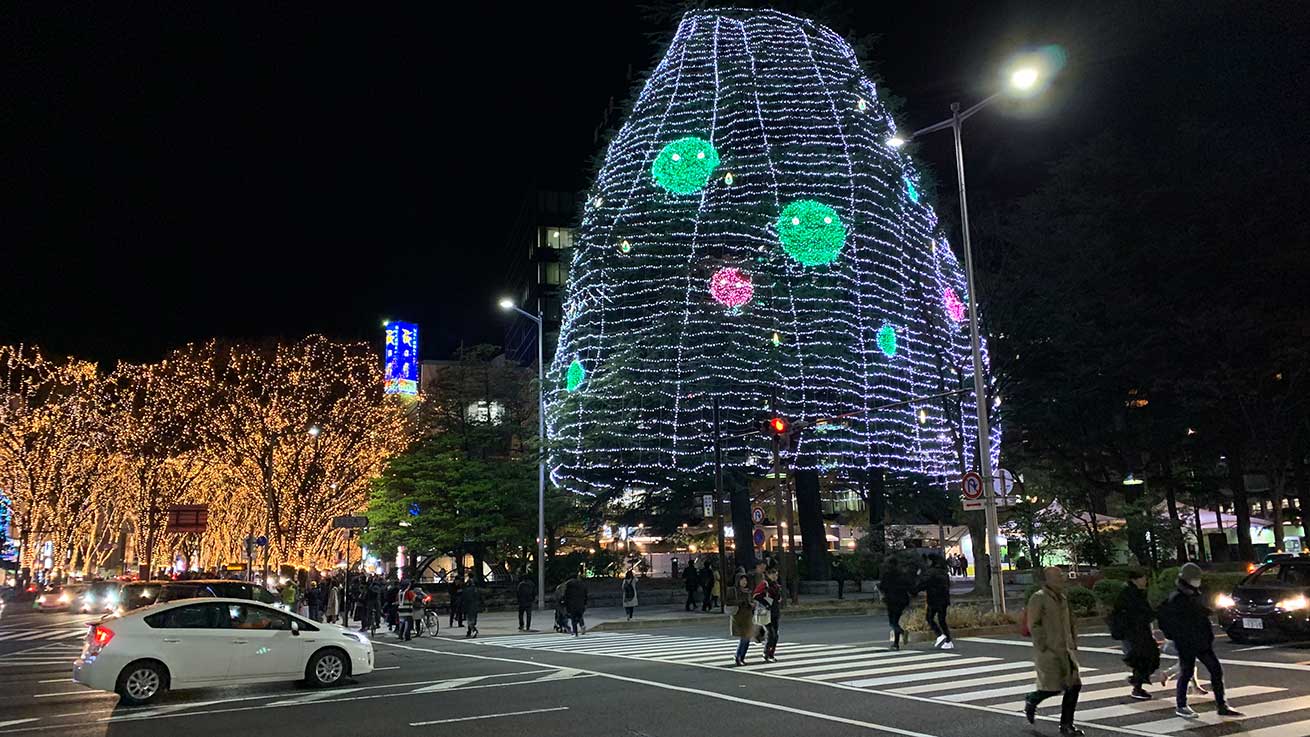 Lucky for us, Jozenji-dori is not that far from us, and therefore we have lots of options to see the 2019 Sendai Pageant of Starlight. A few nights ago, after stopping for some Melon Pan, we walked all the way down Jozenji-dori to Kotodai Koen. We loved the lights twinkling in the trees above the people enjoying themselves for the holidays. We even saw a couple having their wedding pictures taken amid the sparkling trees.

Setting Up the Pageant of Lights

The 2019 Sendai Pageant of Starlight is the most significant winter illumination in Sendai, and one of the major ones in the entire Tohoku region. And it does take some time to set up the display. Since the Pageant of Starlight is an annual event, the electrical conduits for each tree are underground. In October, we first noticed crews beginning to wrap the trees in a protective burlap cover and rigging the breaker boxes for each tree. 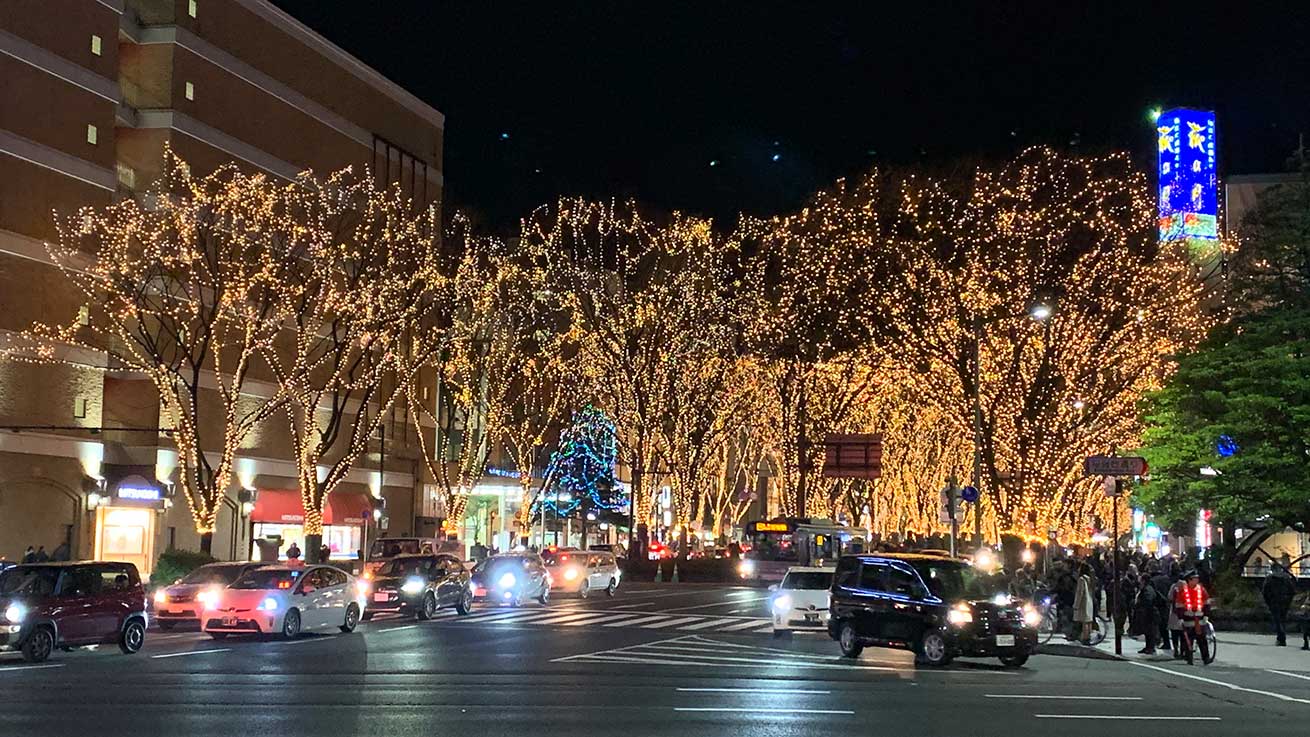 The next phase involves the wrapping of the tree limbs in the thousands of lights. Some of this is done during the day. But much of this has to be done when traffic has died down at night. Once all the lights are strung, electricians connect all the circuits and test everything. This is definitely a significant undertaking.

Opening Night for the 2019 Sendai Pageant of Starlight

On the first Friday of December, the lights are turned on for the first time. This also marks the start of the Sendai Winter Carnival, including the ice rink and beer tent at Kotodai Koen. Of course, there are food and drink vendors; this is Japan, after all. And it would not be complete without the whistle of a Yaki Imo vendor. 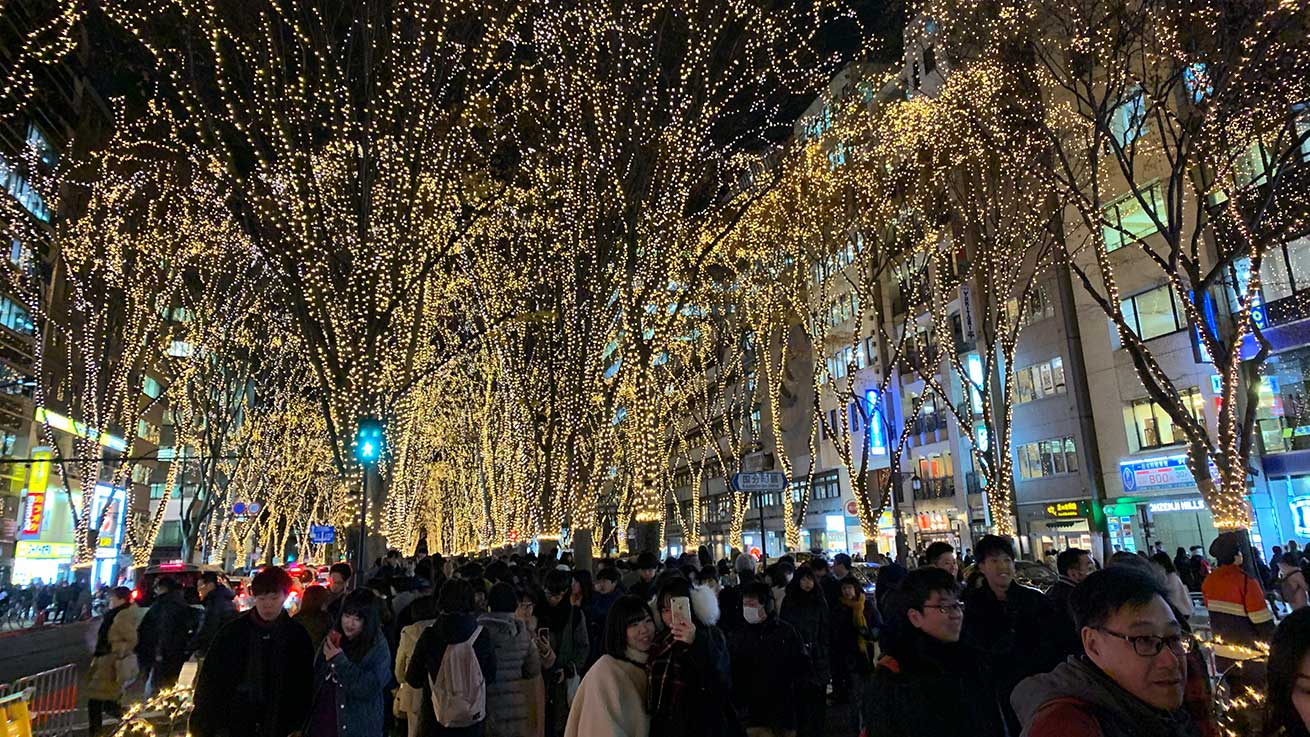 But the main event is the lighting of the trees. A huge crowd turned out for the official opening of the 2019 Sendai Pageant of Starlight. Once it got dark enough, the lights came on, one block at a time. Starting at the far end, the wave of lights reached Kotodai Koen among excited cheers and applause from the gathered crowds.

A Holiday Tradition in Sendai

For us, and for many locals, taking a stroll through the 2019 Sendai Pageant of Starlight is a must during the holiday season. Sometimes Coco and I go out of our way to see the lights.  We love to walk down the park in the middle of Jozenji-dori for a bit. It is such a magical experience. The lights in the trees cast a warm golden light on the crowds below. Children point excitedly, adults look in awe, and couples take selfies. 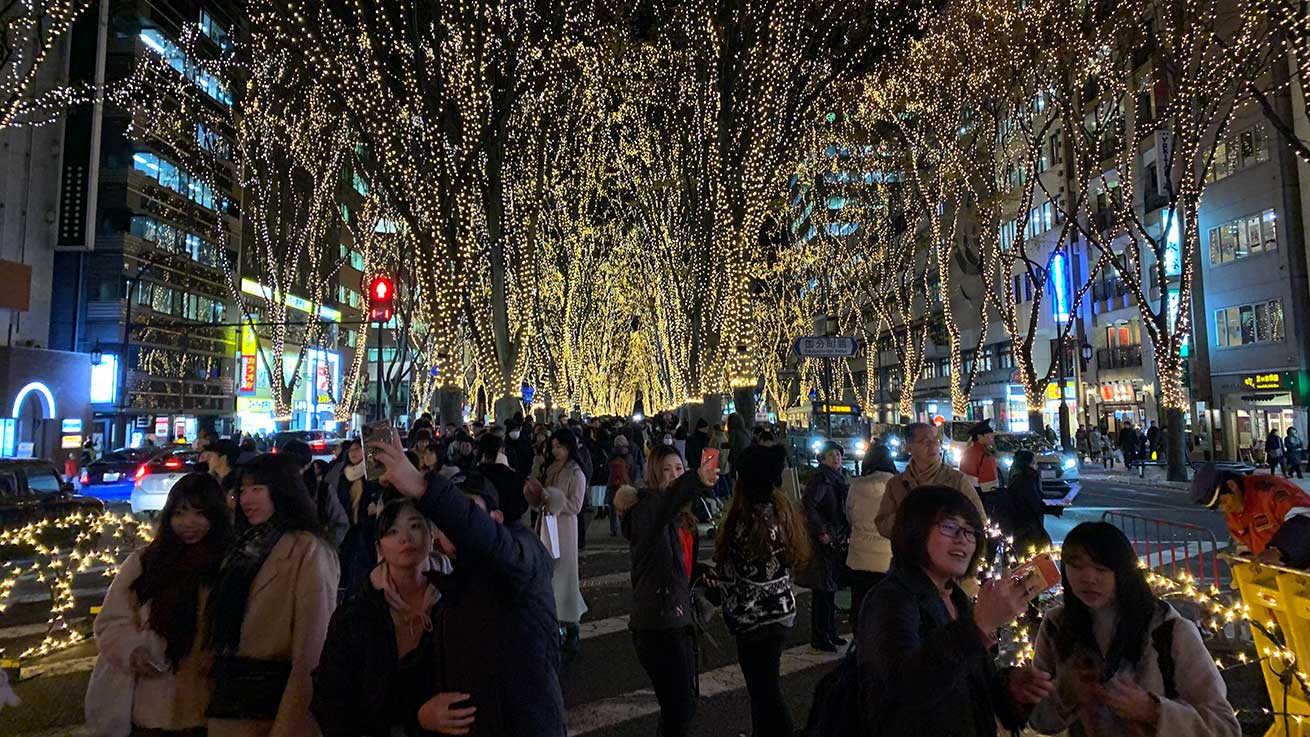 We have walked along the 2019 Sendai Pageant of Starlight a few times already, and we definitely will go again. It was one of our very first memories of Sendai. And it has become one of our holiday traditions. We hope you enjoyed the experience as well.

If you would like to join us for a stroll on Jozenji-dori or want a personal guide to Discover Sendai, please feel free to contact us for rates and availability.