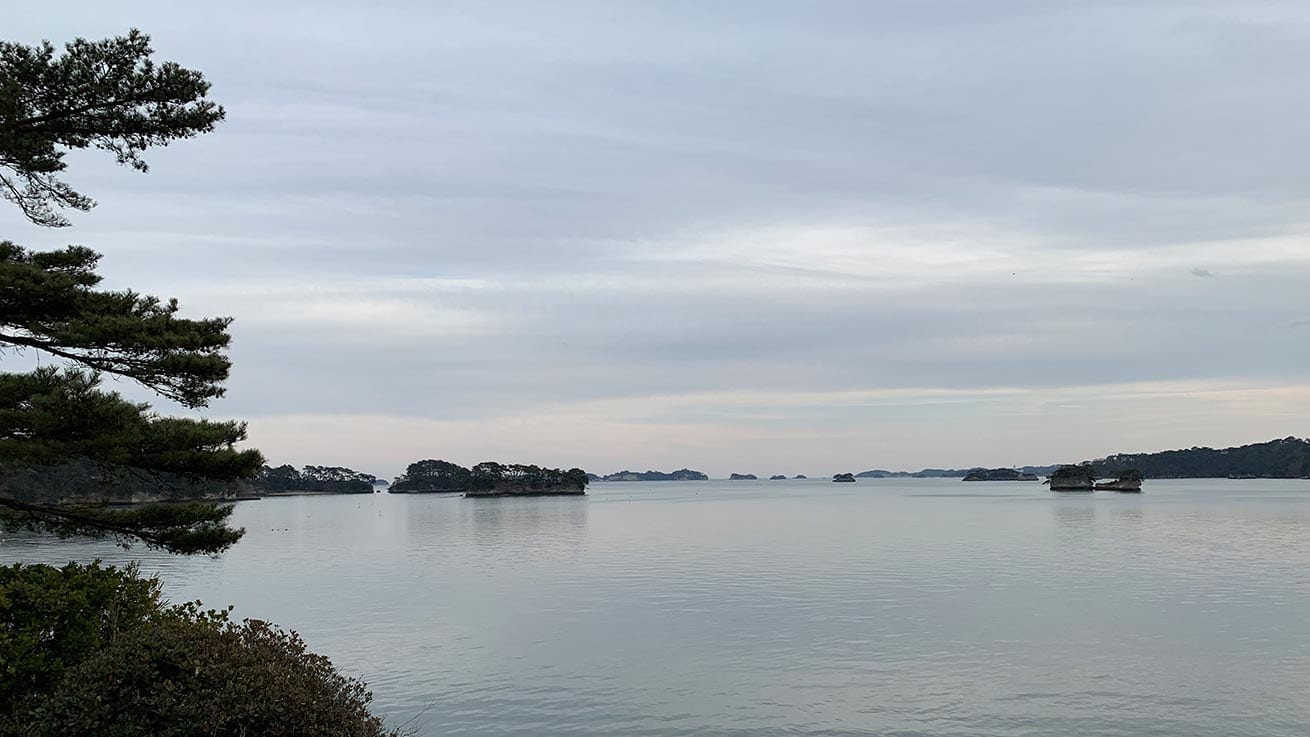 Matsushima Bay – One of Japan’s Most Scenic Views

A Trip to Matsushima Bay 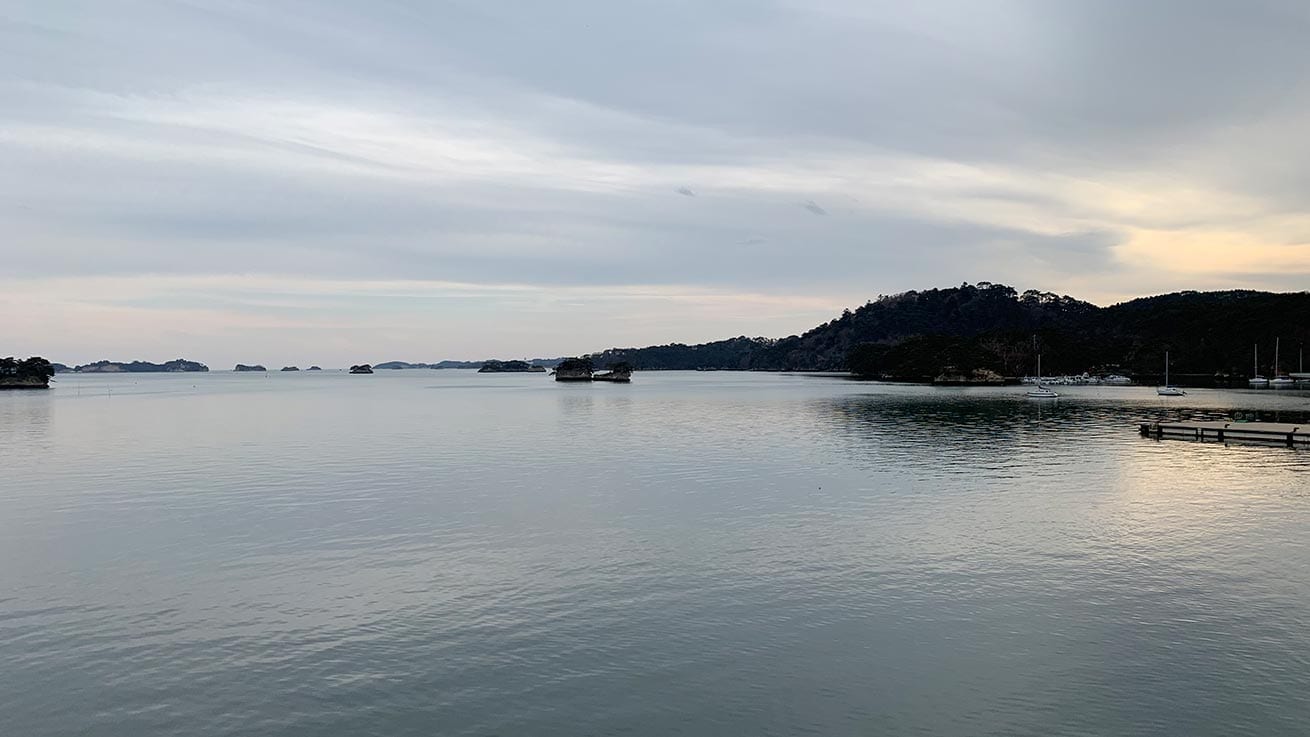 One morning about 6 weeks after we arrived in Sendai from Seattle, we decided pretty much on the spur of the moment to head up to Matsushima Bay to take in the views and sample the seafood. We had just come back from a trip to Tokyo, including a visit to Takeshita-Dori, the famous fashion street, and were looking forward to a change of scenery and pace. 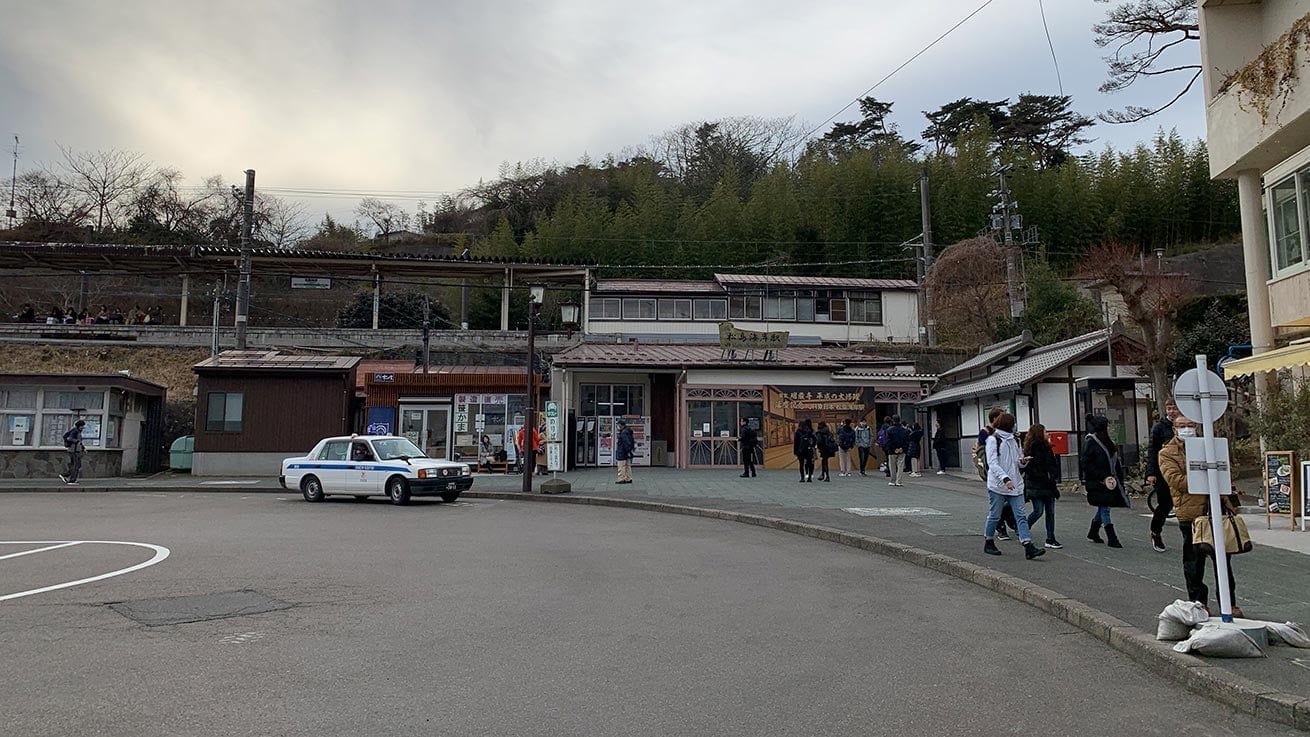 Getting to Matsushima Bay from Sendai Station is easy, simply take the JR East Senzeki Line from platform 9, and you will arrive at Matsushimakaigan station in about an hour. This cute little station is only a short walk from the waterfront, and the many seafood and specialty restaurants.

Eating Our Way through Matsushima Bay

As I already mentioned one of our main reasons for visiting Matsushima Bay was to sample some of the great seafood here. In less than ten minutes from the station we passed a place that sold Sasa Kamaboko, or bamboo leaf shaped fish cakes, that you can grill yourself. We bought two, sat down at one of the grilling stations, and eagerly awaited them to turn a golden brown, indicating they were ready to eat. 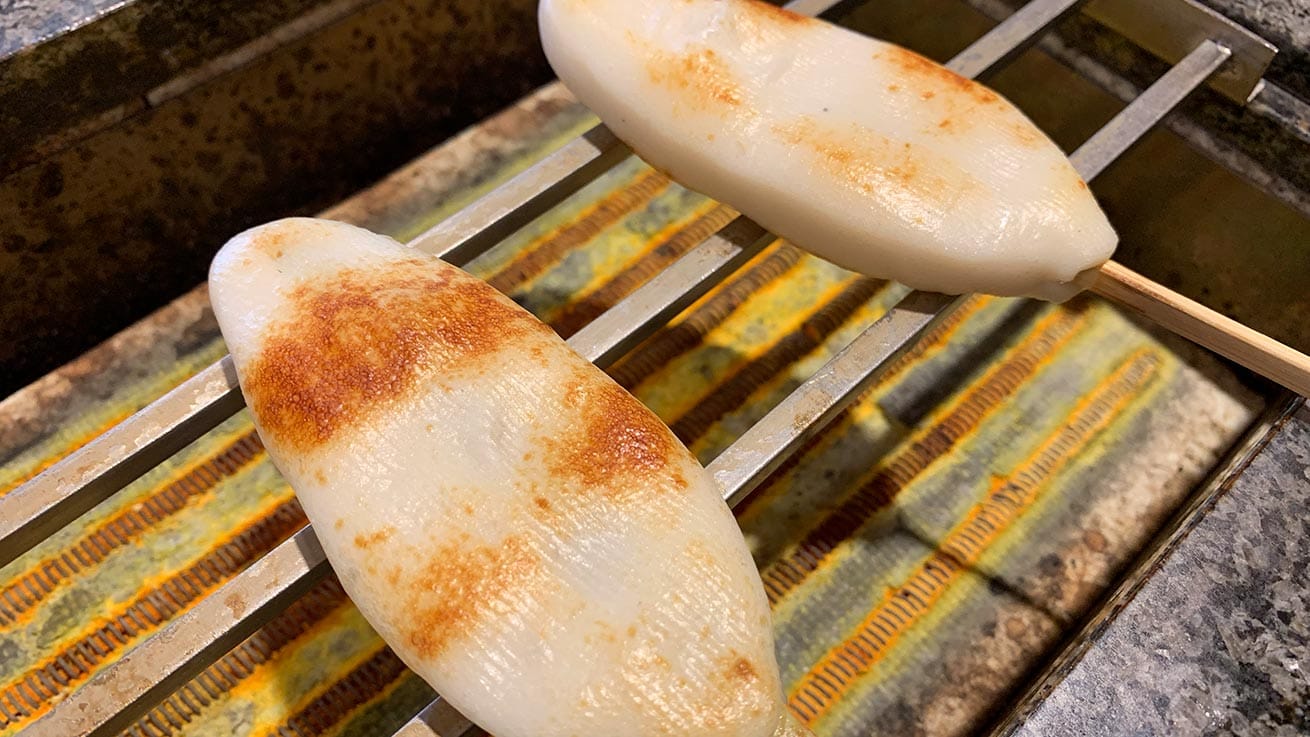 Fortified we headed out again but didn’t make it all that far. Literally around the corner we came across an open window, and the delicious smell of fresh broiled octopus. That looked so delicious that we simply had to investigate. A short conversation with the old cook behind the window brought us inside this simple traditional seafood restaurant. 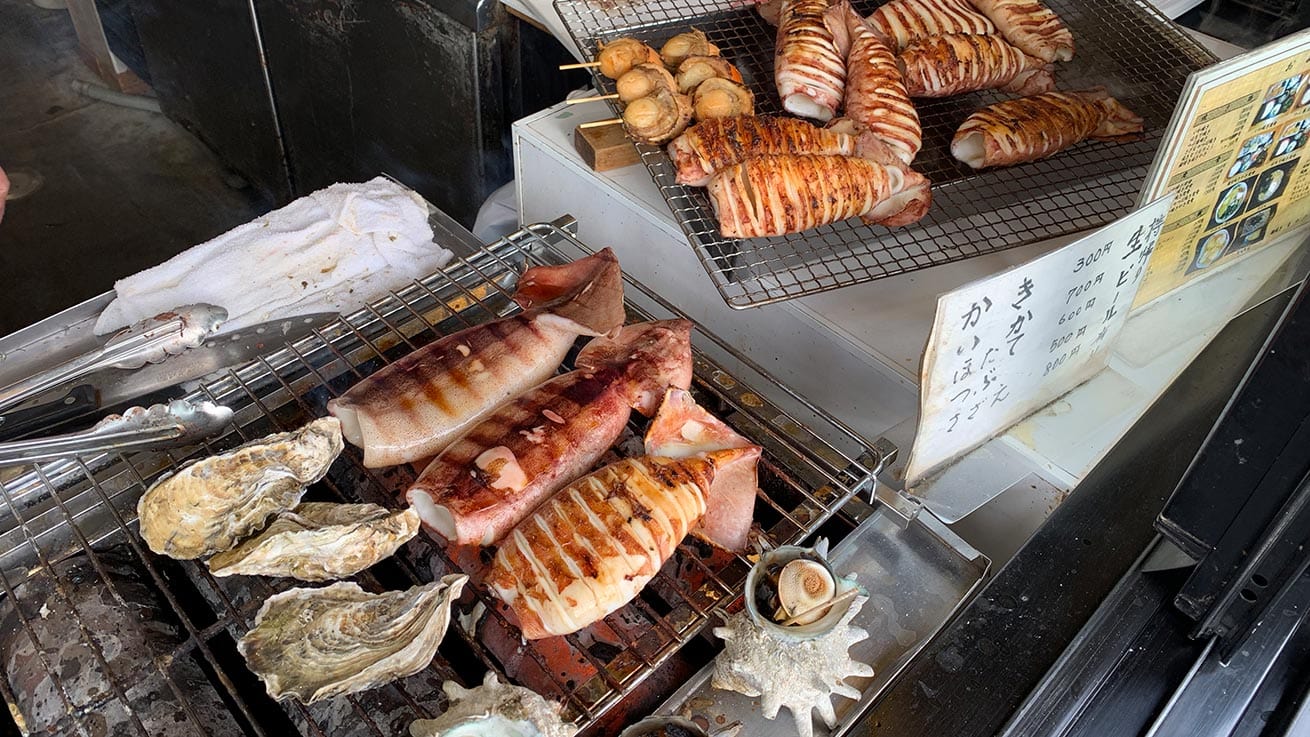 In addition to broiled squid we sampled some of the famous Matsushima oysters, scallops, clams and a variety of delectable morsels fresh from the grill. During our meal we talked to the old proprietor and his wife and learned about more about Matsushima Bay. We came during the offseason and had the entire place to ourselves. During the busy summer months long lines are usual, and the restaurant offerings can sell out quickly, we were told.

The Bridges at Godaido Temple

After stuffing ourselves with seafood pretty much since our arrival we decided to take in some of the famous views and attractions. A short walk brought us to the waterfront promenade, and a view of Matsushima Bay and some of the 269 islands in it. We can easily understand that the serene beauty and tranquility appealed to generations of locals and visitors alike. 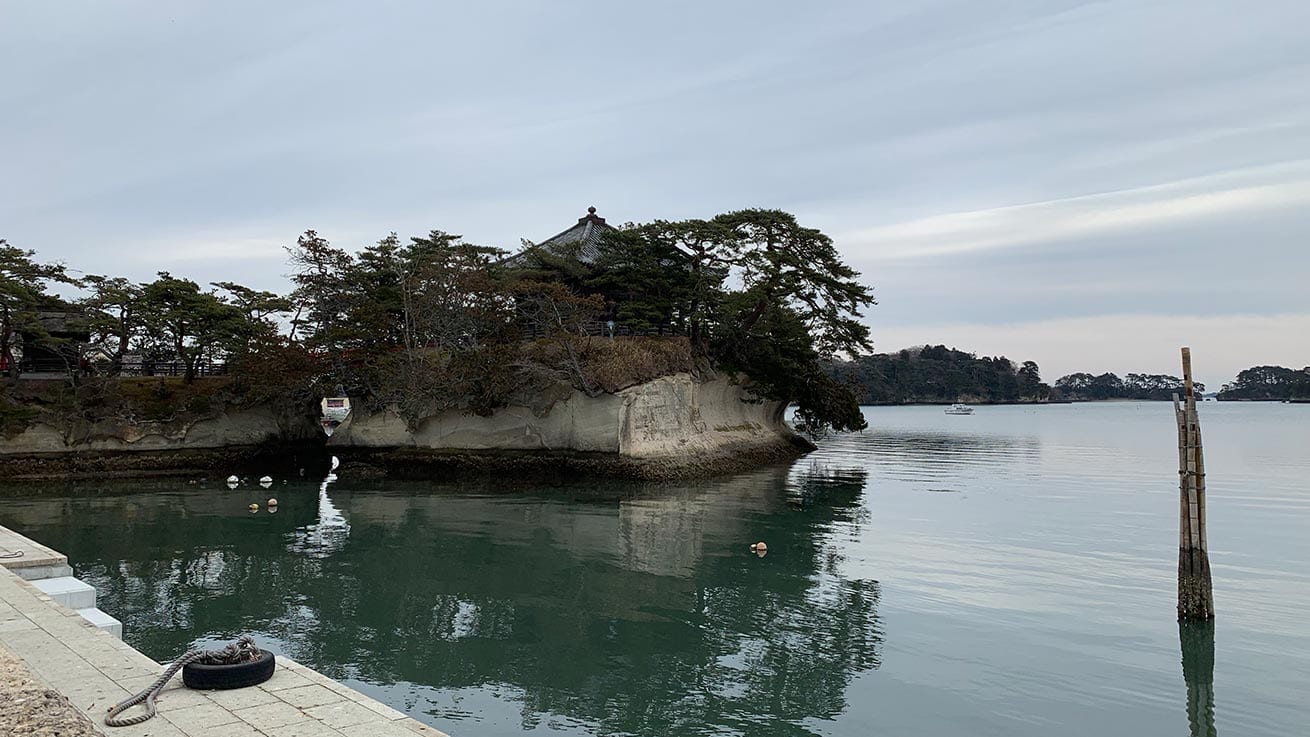 At one end of the promenade we spotted one of Matsushima Bay’s famous temples, Godaido Temple. This temple is located on a series of tiny islands, each connected by a red bridge. And the bridges are famous as well. The last two have planks that are spaced apart, giving you both a great view of the water below, and the opportunity to have your leg slip in between. 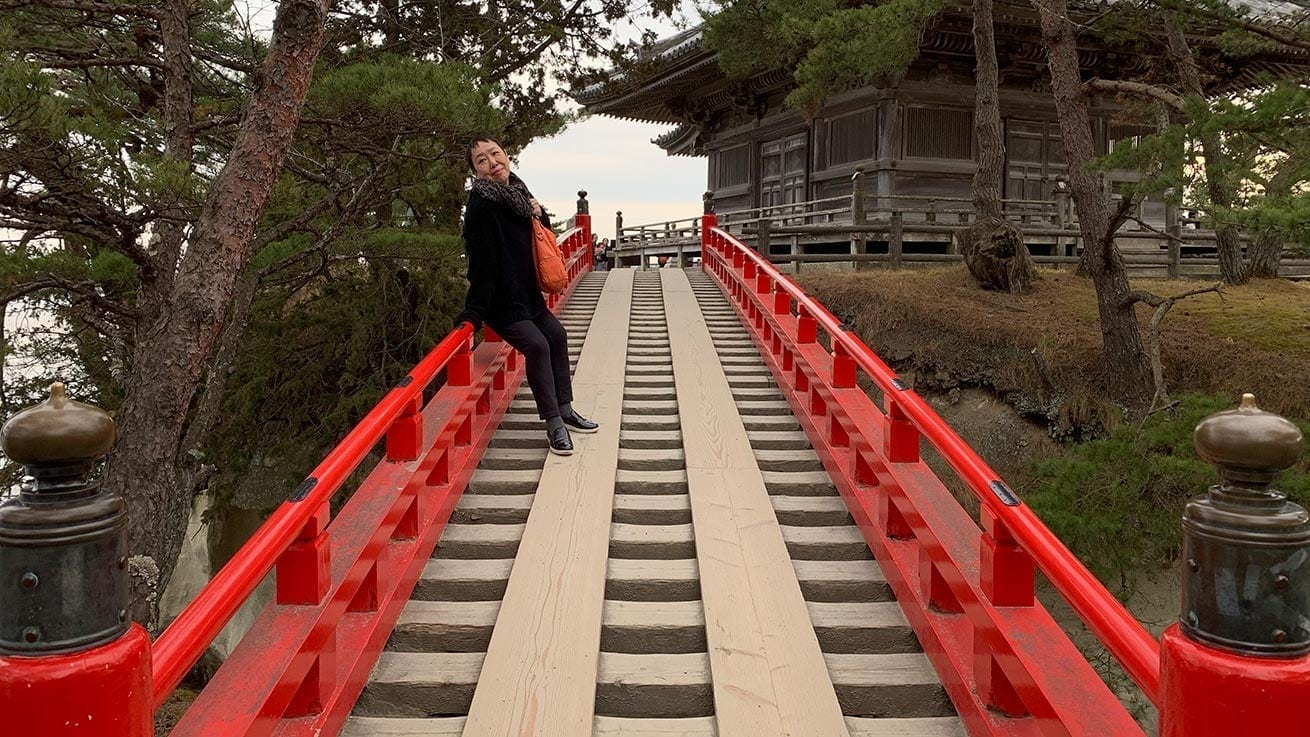 We made our way across carefully and suffered no mishaps. As we walked along the paths overlooking Matsushima Bay, we reflected on the generations of worshippers that gazed upon the same view. We said our own prayers and gave offerings as thanks for being fortunate enough to experience this beautiful spot ourselves.

A Trip Back to the Showa Period

After our visit to Godaido Temple we were hungry again. We found another local spot, this one on the second floor of a building overlooking the tour boats on Matsushima Bay. As we watched the boats returning for the day, we enjoyed more seafood, including some of the local eel, and Chirashi rice. The couple running the restaurant explained that during the summer months there are fireworks on the bay in the evening, but in the offseason they usually closed early. We took that as a hint, and after meeting their daughter returning from school, we paid our bill and set off back to the station.

Since we had already come along the waterfront, we decided to explore an inland route, and we were glad we did. Once we passed the restaurants and seafood market we quickly were in the older part of town dating back to the Showa Period. We discovered many beautifully preserved buildings, including storefronts, restaurants, farm houses and Kura, or store houses.

We also discovered another of Matsushima’s famous temples tucked away at the end of a quiet side street. And signs of even earlier worshippers and shrines hewn into the cliffs date back to the times before the arrival of the Date Masamune clan in the early 1600’s. 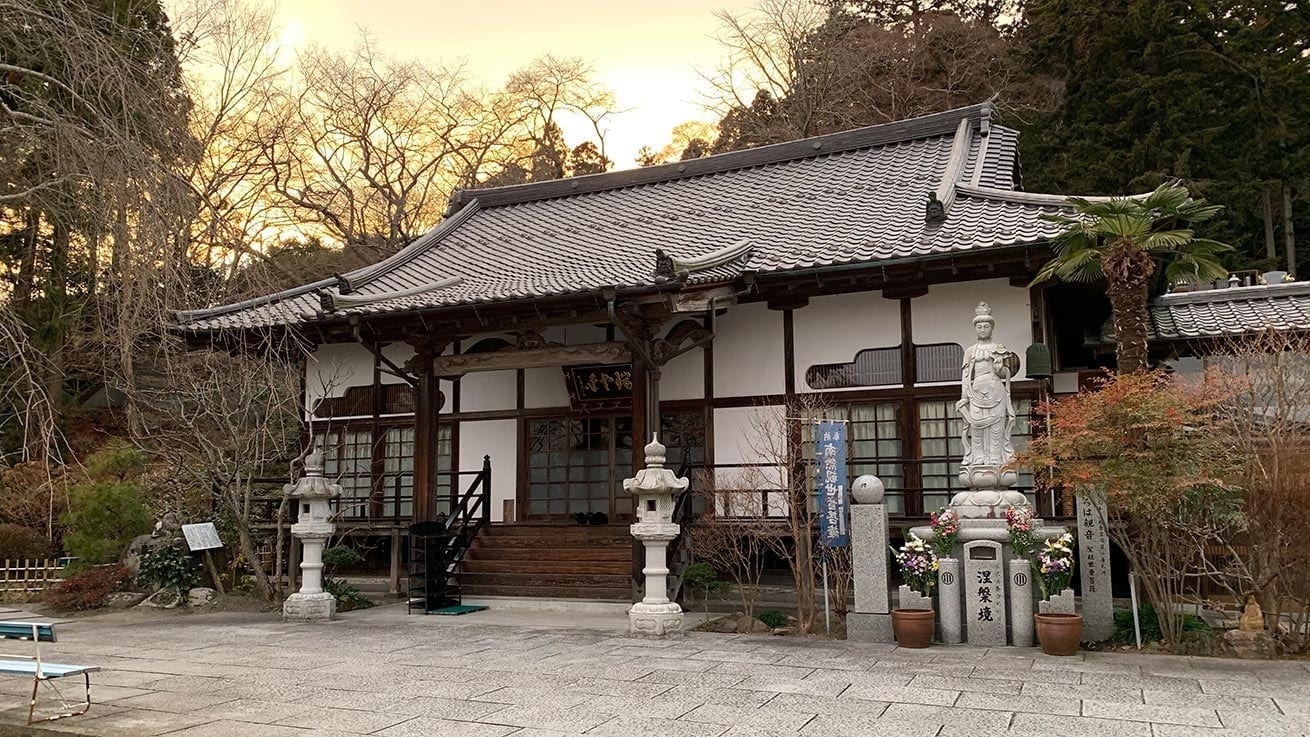 Heading Back to Sendai

As you can tell we had a great time eating our way through and exploring Matsushima Bay. At dusk we headed back to the cute little station and waited for the train back to Sendai Station. As darkness fell on the quaint little seaside town, we bid farewell for now. But we will definitely be back.

If you would like to join us on one of our food tours, or get a personal tour of Matsushima Bay, please feel free to contact us for rates and availability.