Sakura and Hanami at Tsutsujigaoka Park in Sendai

Even by local standards the 2018-2019 winter season was a bit rough in Sendai. With freezing cold and intermittent snowfall stretching into early April it is not surprising that the locals were ready for the arrival of spring, sunshine, and warmer weather. And what better way to celebrate the arrival of spring than Sakura and Hanami? 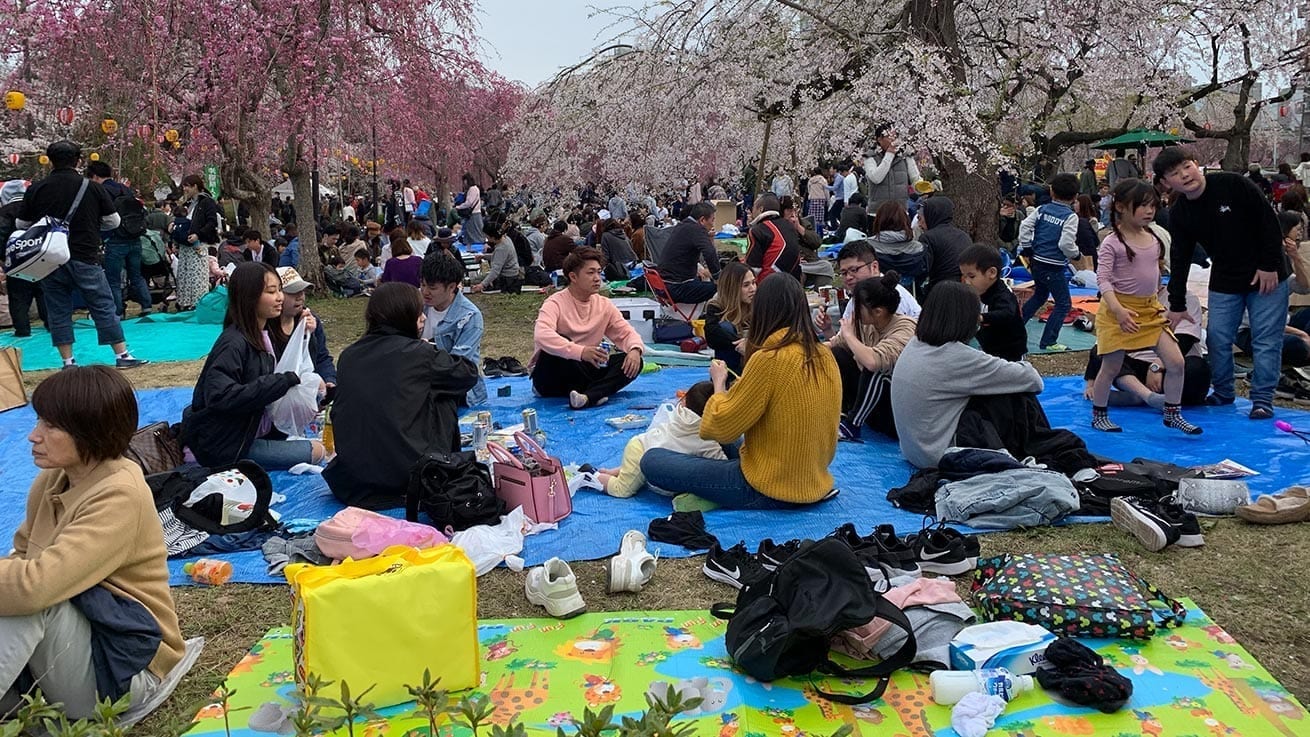 We have been looking forward to this season since we arrived in Sendai, and were lucky enough to participate not once, but twice! Both times we joined the festive crowds at Sendai’s premier cherry blossom viewing spot, Tsutsujigaoka Park.

The first time we came across this more or less by chance. On a Friday afternoon we had business nearby, and on our way back to Sendai station we decided to walk through the park and check out the blossoms ourselves. We noticed people walking in the same direction, and simply decided to follow them. 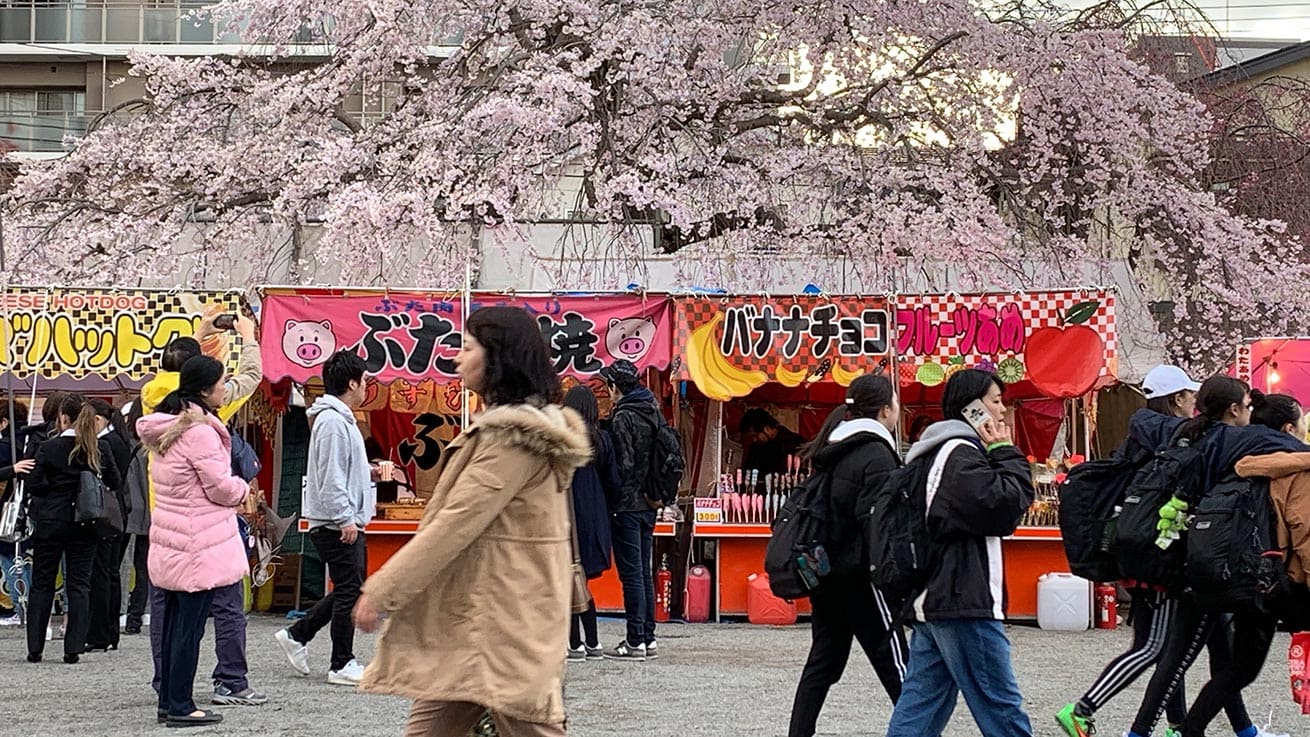 As we got closer to the area with the Sakura trees the crowds increased, and soon we were part of a throng of people heading to the area with food and drink vendors. Since this is Japan you can buy and consume alcohol in public. Of course, Coco took full advantage of this! 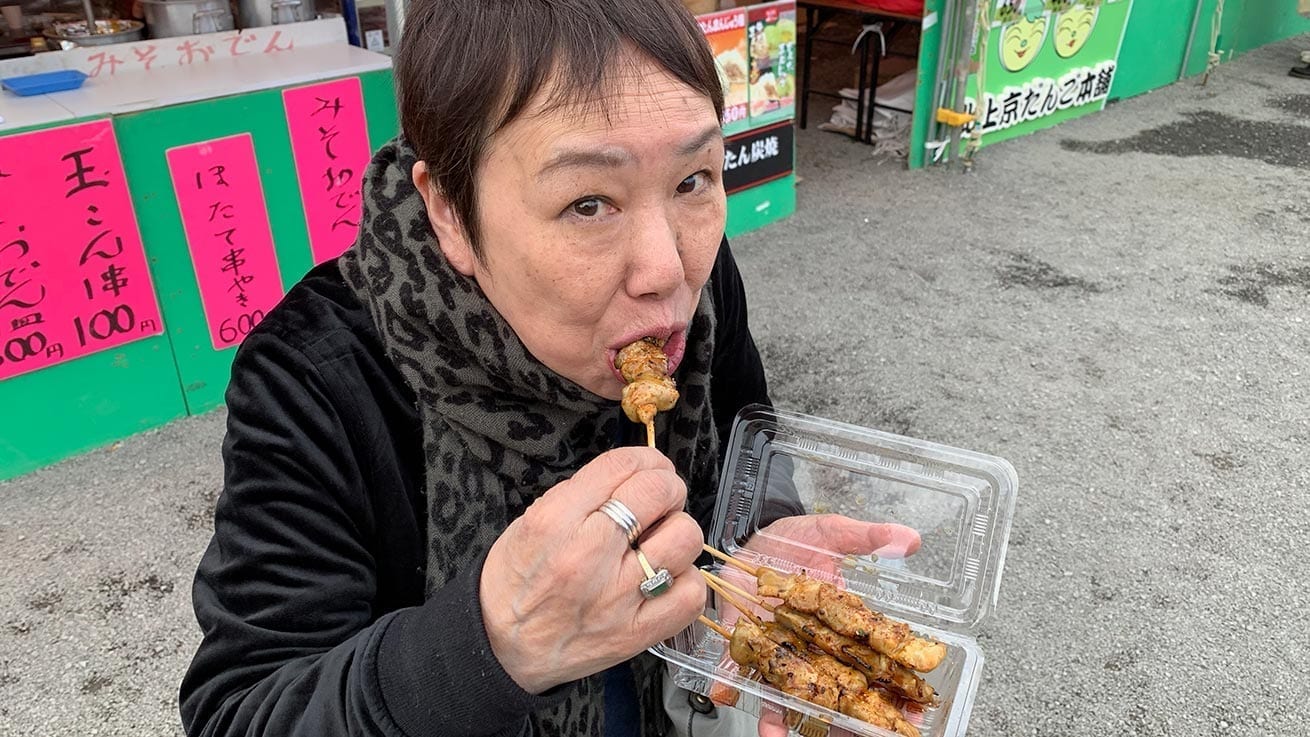 But we also sampled delicious yakitori and yakisoba, both of which are commonly served by food vendors at festivals and other public events.   Seeing this was a Friday afternoon we noticed many companies celebrating Sakura season by having viewing parties for their staff and employees under the cherry blossoms. It was a lot of fun to see men and women in formal business wear kicking off their shoes and enjoying food and drink. 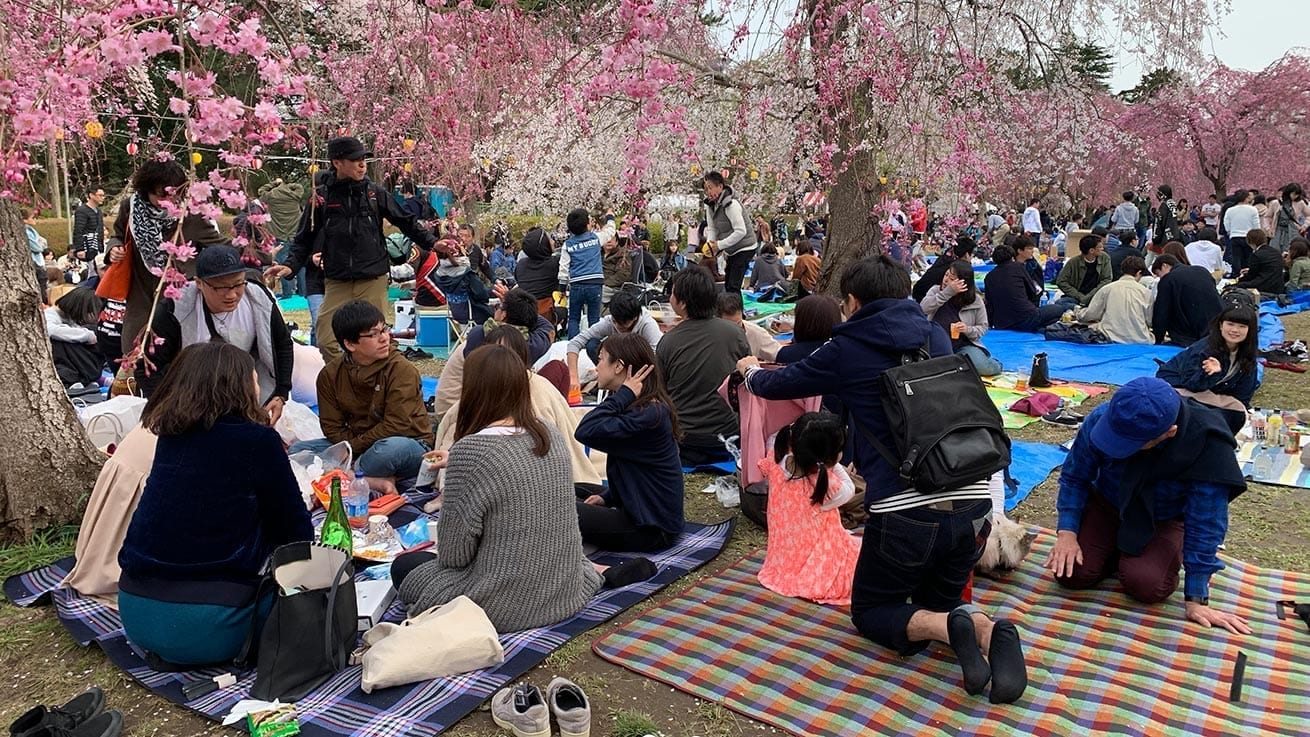 Sakura and Hanami on Sunday

Since we had so much fun on Friday afternoon we decided to go back on Sunday. And this time it was a lot different. Seeing this was Sunday it looked like most of Sendai had the same idea. The crowds were so big that police had to direct traffic on nearby streets, and local convenience stores were doing brisk business as well. After stocking up on drinks, which were cheaper at Family Mart than at the vendors in the park we were ready. 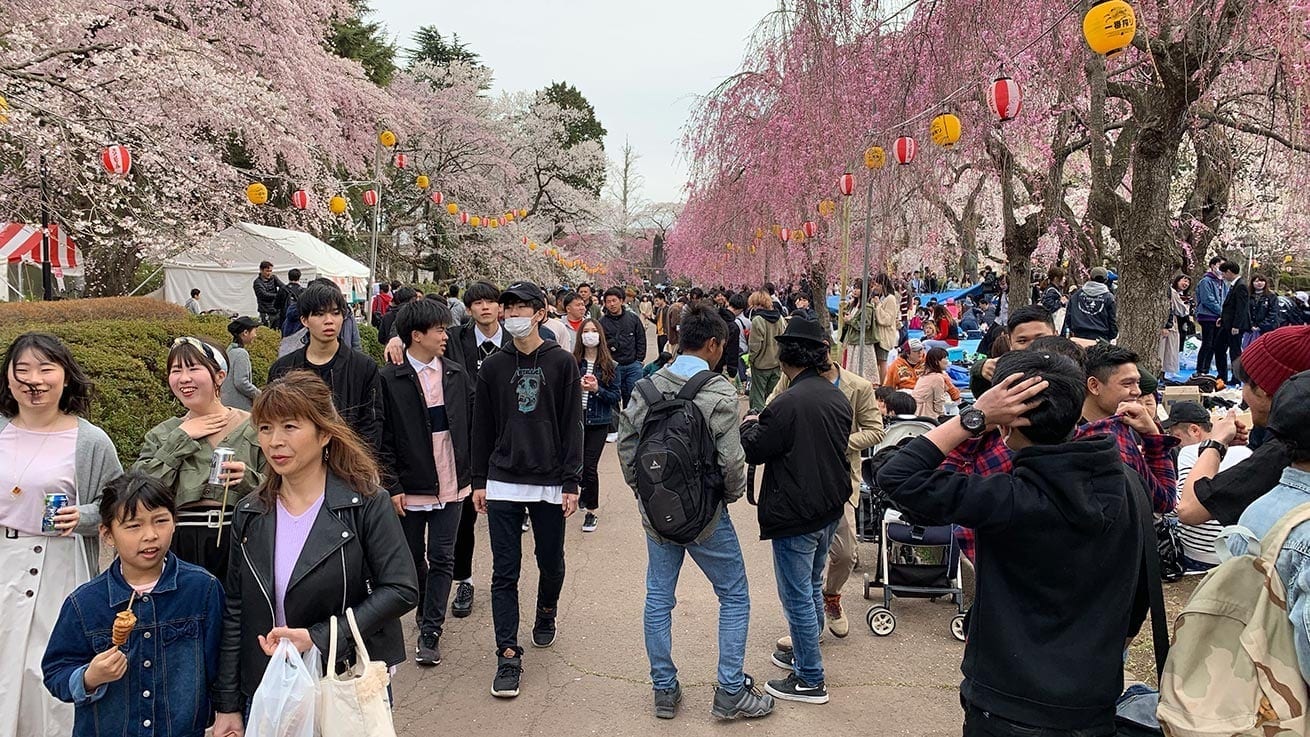 We simply followed the massive throngs of people into the park. And this time it looked like every square inch of space under the cherry blossoms was filled with crowds enjoying Sakura and Hanami. Some people simply brought a blanket and a cooler. Other groups went all out; we even saw karaoke setups and portable coolers. We tell you, Japanese love to party! 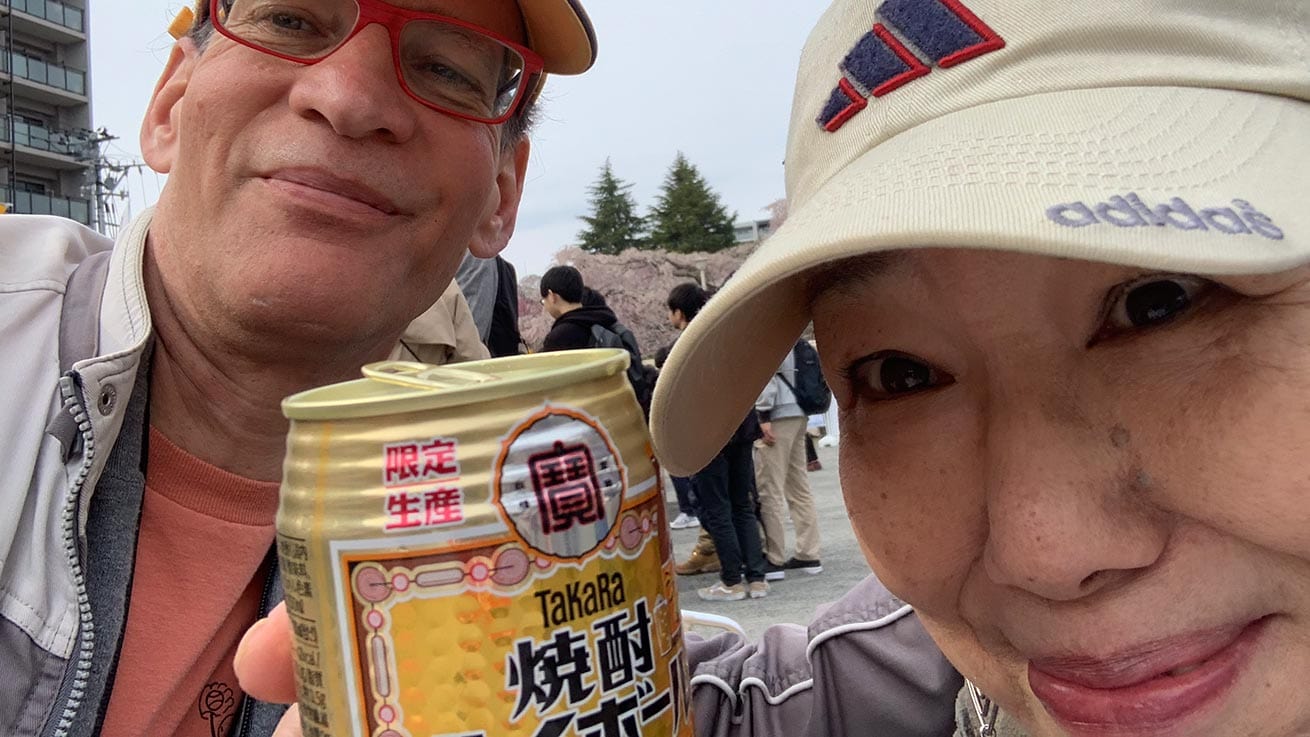 We headed straight back to the food vendors; I had an urge to sample of the famous Gyutan buns I noticed on Friday. Just like under the cherry trees the section with the food vendors was jam packed with people. Some stalls had well over 100 people lined up, and that continued all day! 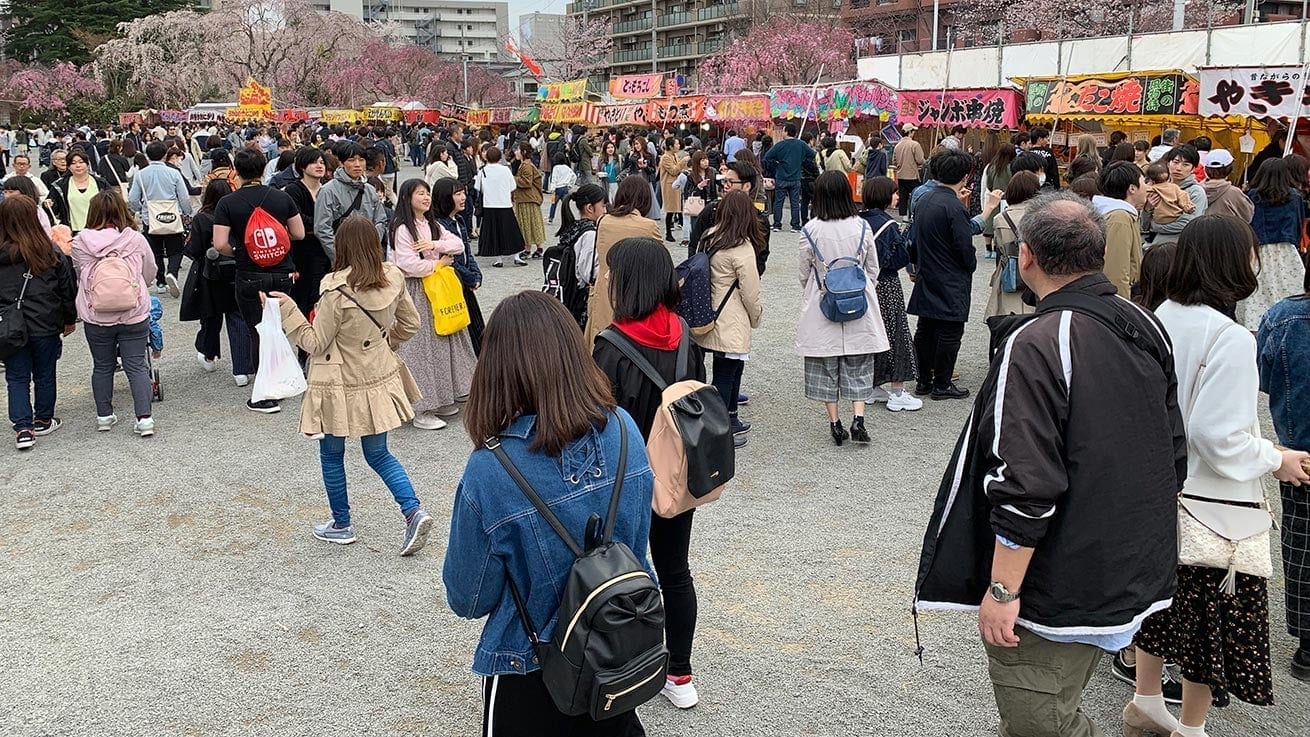 Since eating and drinking is difficult standing up, we looked around for a place to sit down. Grabbing a table for ourselves was out of the question. But we noticed two empty seats and asked the young couple at the table if we could join them. They agreed, and we spent the next few hours sitting, eating and drinking with our new friends. Just like us, they were adventurous foodies, so we quickly formed a bond. 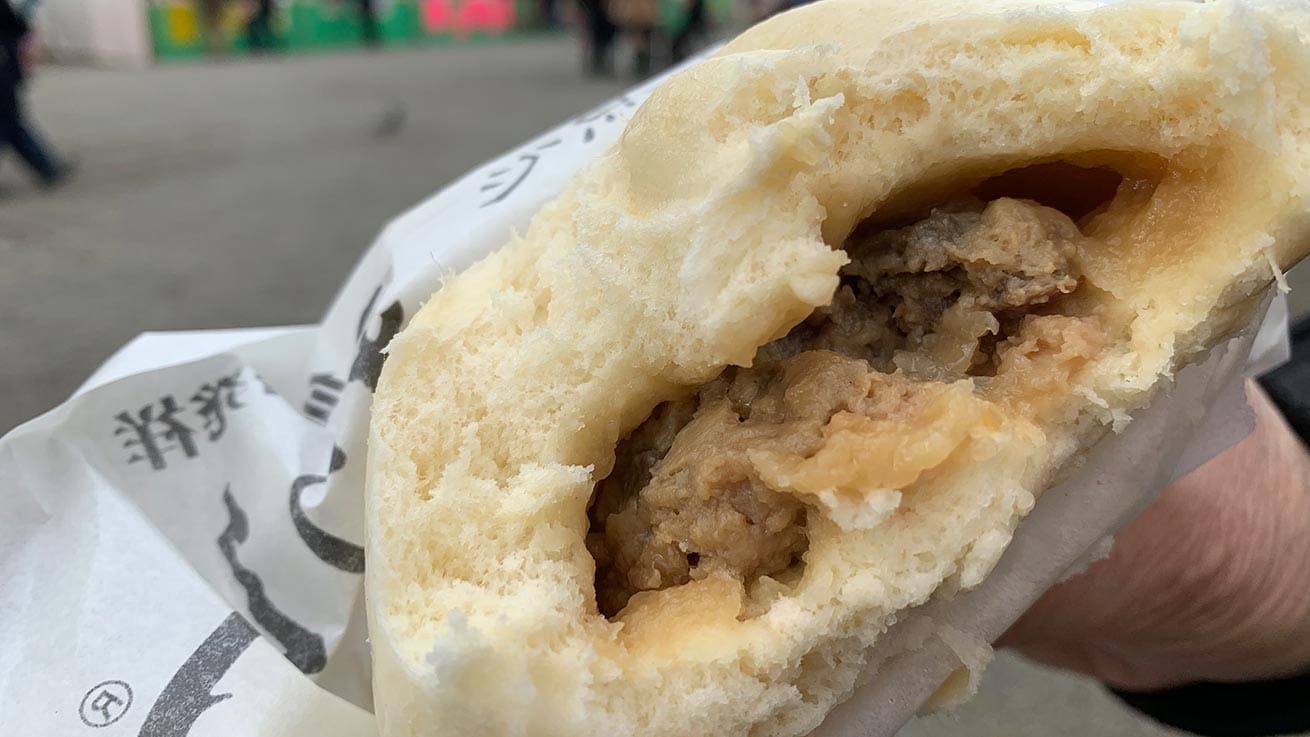 And yes, I got my Gyutan buns. I ate four of them!

Sakura season varies slightly from year to year; a lot depends on the weather. If you are interested in experiencing Sakura and Hanami in 2020 here is what you need to know to plan ahead. Bookmark this page so you can check for the latest updates.

If you would like to join us on one of our food tours, or get a personal tour of Sendai, please feel free to contact us for rates and availability.